Oscars May Return to Only 5 Best Picture Nominees 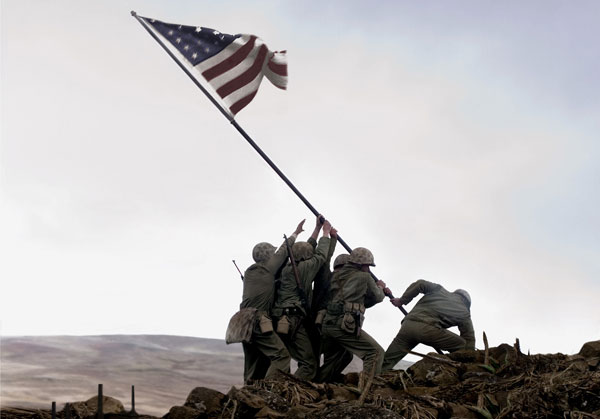 This Wednesday is Veterans Day, and if you’re like me, you will be searching for the perfect war movie to watch on the holiday.

Few movie genres are as intense as the war film genre. And whether it’s an old classic like All Quiet On the Western Front or a newer entry like Fury, there are plenty of movies to choose from. So we’re looking at ten epic films to help you remember the sacrifices of soldiers this week.

Flags of Our Fathers Directed by Clint Eastwood and created as the first film in a two movie series, Flags of Our Fathers tells the story of the men who raised the American flag during the battle at Iwo Jima, both before, during, and after the war.

Flags is intense, grotesque, and bloody. And while undoubtedly patriotic, its main purpose seems to be to deliver one simple message: Human life is invaluable and should not fall victim to the likes of war. I first saw Letters from Iwo Jima on a whim, But I am certainly glad that I watched it. It is the second half Eastwood’s two-part film series, but instead of showing the battle of Iwo Jima from the American perspective like Flags of Our Fathers does, Iwo Jima gives the account from the Japanese point of view.

Some of the scenes are shocking and downright jarring, especially one moment, when the Japanese are caught in the tunnels under the beach with no way out, they choose to perform a mass act of honor suicide rather than face the horrors of war that await them above ground.

Iwo Jima makes you feel horrible for the people to died in that battle, and, despite all the dialogue being in Japanese, really hits home.

Pearl Harbor has the potential to be a great war movie. Unfortunately, it focuses more on the love triangle formed by Ben Affleck, Kate Beckinsale, and Josh Hartnett. It’s still a better love story than Twilight, but the attack on Pearl Harbor plays second fiddle to the romance, and that’s a shame.

That being said, the actual war scenes of the movie are nothing to be scoffed at. The Pearl Harbor battle is brutal and filled with all kinds of lovely explosions courtesy of Michael Bay. It takes a while to get to that point and doesn’t last for nearly long enough, but I guess that’s what you get when you make a movie based on a single event. Even still, you could do a lot worse for your Veteran’s Day movie pick than Pearl Harbor.

Enemy at the Gates If Letters from Iwo Jima seeks authenticity from its all-Japanese cast, then Enemy at the Gates is its opposite. Starring Jude Law as Russian sniper Vasily Zaytsev and Ed Harris as German sharpshooter Erwin König, the pair engage in a vicious and ruthless game of cat and mouse during the German invasion of Stalingrad.

Enemy succeeds because of its ability to a different side of warfare. It’s not all about gross injuries and lost body parts, though they certainly aren’t banned from the film. The best portions of the movie are found in the quiet, intense moments that make up the bulk of the two snipers’ face-offs. The Lone Survivor is the first modern warfare movie in a long time to impress me.

What makes Lone Survivor stand out from the rest of the movies from this list is that it never really takes a stance on whether or not war is inherently wrong. It simply puts us into the action of a true mission to capture a well-known terrorist behind enemy lines.

Furthermore, while Lone Survivor focuses in on action and characters, it never feels like a cheap action film. It has a story to tell, and wastes no time in telling it. Immediately following his debut as James Bond, Daniel Craig starred in this wartime thriller about a band of Jewish refugees in Eastern Europe who take to the forests of Belarus to avoid Nazi persecution and imprisonment.

Defiance is a somber film that, instead of focusing on big budget action, zeroes in on the lives and struggles of the men and women trapped in the wilderness. The characters are what drives the movie forward, and the performances by Daniel Craig and Liev Schreiber are outstanding.

Defiance is a grave reminder of the tragedy faced by the European Jewish population during World War II, and makes you feel like you’re right there with them in the forest. Rather than telling the typical story of soldiers under fire, The Hurt Locker follows a bomb disposal unit during their time in the Iraq War.

Jumpstarting the careers of multiple actors and director Kathryn Bigelow, Hurt Locker Is exhilarating and draining, and one of the most relatable films ever made pertaining to the war in Iraq.

Lovable characters and great action are the focal point of this Oscar winning film, and you somehow missed all the buzz upon its release, now is as good a time as any to check it out. If Defiance makes you feel sorrow for the victims of anti-Semitism during World War II, then Schindler’s List will make you wish that you could go back in time and change the course of history.

I don’t need to say anything to justify Schindler’s List as one of the greatest war movies at all time. It’s emotionally jarring and intense. It’s not entertaining; it’s engrossing.

The story of Schindler and the lives he saved makes him more of a hero than any soldier on any battlefield could ever dream of being. We Were Soldiers is singularly unique. It is easily one of the most epic war movies of all time, and takes place during the Vietnam War, one of the least explored wars as far as movies are concerned.

I will never forget watching the scene when an airstrike that results in some friendly fire casualties on the American side. And as Mel Gibson goes to drag an injured soldier to safety by the legs, his skin just peels right off like well-cooked fried chicken.

We Were Soldiers is gruesome, realistic, and action packed, and it doesn’t lack in the emotion department. I am of the firm belief that everyone needs to watch the Normandy scene of Saving Private Ryan. Whether you watch the rest of the movie is entirely up to you, but it is certainly the most epic war movie of all time. It also is one of the most violent and true-to-life war movies.

Private Ryan puts you right into the action and really lets you feel the intensity and anxiety of each scene. Every character plays a crucial role, and the whole ordeal is pretty terrifying.

If you are looking for the ultimate movie to pay tribute to those who fought and died in the wars of the world, you won’t find a better pick than Saving Private Ryan.