Epic Spotlight on ATC’s Own Vakarians 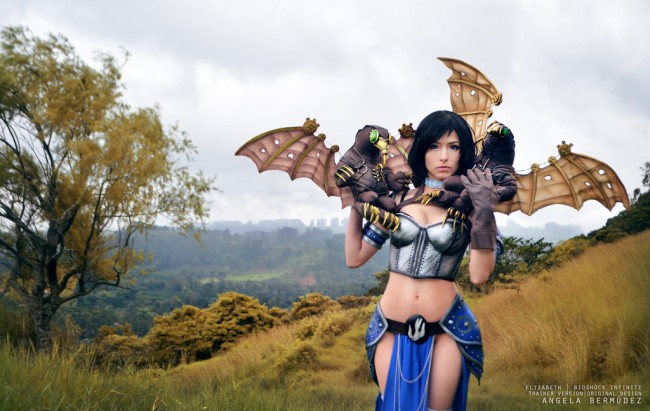 Cosplay means borrowing someone else’s creation and turning it into living fanart. There are people who strive to always be screen accurate, and get their cosplays as close to the canon look of the character as possible. Others take what’s most iconic about a character’s look an interpret it to fit different styles, genres, and ideas. While I sincerely admire cosplays that look as though they were taken straight off the screen, page, or game, I have a special love for those who do something new and different with well-known characters. My jaw absolutely dropped at seeing Angela Bermudez‘s new original concept of Elizabeth from Bioshock Infinite. Angela had already done a killer job of creating a screen accurate version of Bioshock’s Infinite plucky young heroine, as well as another original Elizabeth look. Her canon costume Liz is picture perfect, and her first original take, Skydiver Liz, was a lot of fun. But this one takes the cake for creativity and craftsmanship. Songbird Trainer Liz is very recognizable as Elizabeth, what with the blue skirt and excellently distressed, corset-like breastplate. I absolutely love how she turned the iconic songbird pendant into a belt buckle. This truly is living fanart. Take a moment to look through the related photos on Angela’s DeviantArt, and you’ll see that this costume was based on her own original illustration. This cosplay plays heavily into classic fantasy costume elements, mixing armor with a sweeping skirt and a bit of skin. It’s what we could easily imagine a dragon trainer wearing in a fantasy-based tale or game. But those are no dragons on Angela’s shoulders – they’re miniature versions of the Songbird guardian that was both a friend and a bane to Elizabeth (and a Boss to fight) during the course of Bioshock Infinite. Really, Angela deserves recognition for the Songbirds alone. It takes a whole other skill set to make tiny, plush versions of giant, mechanical creatures. Look at their amazing wings! This entire cosplay is just incredible. I know I’m not alone in saying that I can’t wait to see what Angela does next.

Check Out this Epic Cosplay of Rin Matsuoka from Free!