This Cosplay of Bellona from Smite Will Amaze You

Brave the Seas with This Glorious Edward Kenway Cosplay 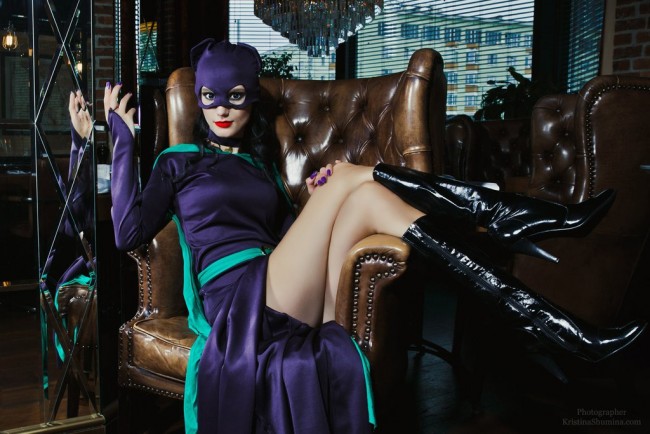 Selina Kyle – better known as Catwoman – made her comic book debut in spring 1940 in Batman #1. Originally called “The Cat”, she began as a mysterious burglar and jewel thief. Her personality as the iconic femme fatale was established even from her very first appearance. However, in the Golden Age, she did not wear her iconic cat suit and actually did not even wear a costume until her second appearance, And even then she donned only a cat mask to hide her identity. Her catsuit did not come into play until the 1960s, and even then it was green, much different than her sleek black catsuit of today. The costume that cosplayer MarinaRelkO has chosen is Catwoman’s 1950s Golden Age outfit which consists of a purple dress with a matching cat mask,and a green cloak. Marina has selected one of the femme fatale’s lesser known outfits and has crafted a stunning recreation in real life. With the gorgeous satiny fabric she chose for the dress and the mask it really gives the costume a classic and elegant feel. For those unfamiliar with Catwoman’s earlier escapades, seeing this beautiful cosplay by MarinaRelkO will inspire any Catwoman fan to want to read more! Everyday Epic Cosplay: An Ensemble Inspired by The Flash