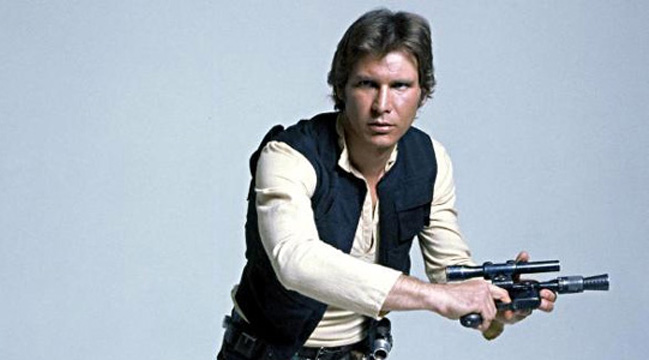 The casting call and auditions for the part of young Han Solo in the upcoming spin-off movie are officially underway. Reportedly, over 2500 actors have auditioned for the part, but who will get the coveted role?

Han Solo is one of the most recognizable badasses of all time, and it will take a special actor to fill the mid-length leather boots left behind by Harrison Ford. So, who is capable of such a feat? Here are five actors that could potentially play the desirable character. Hunter Parrish has made a name for himself on HBO’s Weeds. But if you’re poor like me, you haven’t ever seen Weeds, making Parrish a virtual unknown. This bodes well for Parrish, as casting an unknown actor seems like a better possibility than casting a mega-star.

Parrish has the looks and the acting chops to handle the part. In fact, he even sort of looks like Harrison Ford. I’d put my faith in him to bring a younger, funnier, and more immature Han Solo to life. If Hunter Parrish is the funny and immature Solo, then Madden is his opposite. He’s much more well known, and with his role in Cinderella, is now no stranger to Disney properties. Dark and serious may not be the best path to take when bringing a pre-Episode IV Solo to life, but who knows? Maybe it could work. Remember that little chubby kid from Cheaper by the Dozen? Turns out that he grew up and kind of became a stud.

If the casting directors behind the Han Solo spin-off project really want to cast an unknown, then Schmidt might not be a bad decision.

He’s young enough to fit the age requirements nicely, silly enough to pull off the fun side of Solo, but also capable of being the stuck up, half-witted, scruffy-looking Nerf herder that we know and love. Speaking of unknown actors, Aaron Taylor-Johnson is no longer one of them. A few years ago he would have been, but his starring roles in Kick-Ass and Avengers: Age of Ultron have catapulted him to superstardom.

Taylor-Johnson fits the bill pretty darn well, and is a fan favorite to play Solo, and would help to bring some serious star power to the role and to draw out audiences. That is, of course, as if star power were needed to fill seats to see an entire movie about Han Solo. My personal favorite pick to play Han Solo is also the least likely, but that doesn’t mean he’s not perfect.

Karl Urban is a bit too old to tackle the role, but he is the perfect replacement for Harrison Ford. He has that whole grumpy smolder thing going on, and has been stellar in pretty much everything he’s been in.

Of all the actors on the list, Urban is certainly the most tried and true of them. If, somehow, his age could be circumvented, there is nobody I’d rather see in the pilot’s seat of the Millennium Falcon than Karl Urban.