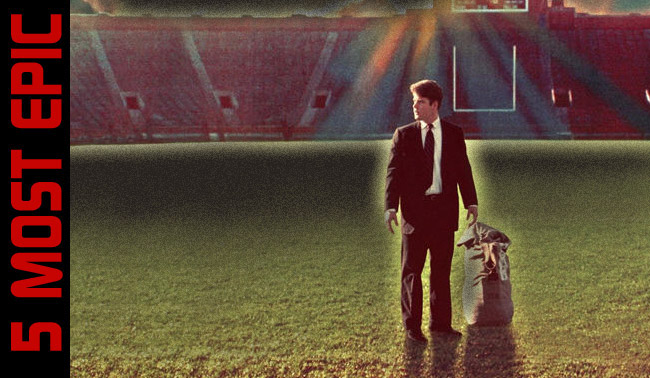 The 5 Most Epic Football Movies

With the college and professional football seasons coming to an end, we thought it would be a good time to take a look at the most epic football movies before the pigskin gets put away for the year. Some football movies focus solely on the games, some are simply a story that takes place in a football environment so if your favorite doesn’t make the list that could be the reason. We wanted the most epic list to be movies that focus on football as much as possible. This little gem is a documentary and is about four college football stars and what happens when they try to make it in professional football. The NFL scouts prefer some players more than others and we see the highs and lows they go through before and during draft day. It is a little movie that goes behind the scenes to show how 22 year-olds are prepared to meet with millionaire owners and also how to get in great physical shape. Matthew McConaughey pulls off a serious role before he started doing serious roles in this true story about the season after the Marshall football team was killed in a plane crash. How can a head coach, played by McConaughey, put together a competitive team and install a system that can let them compete with the other teams? Most of all, how can he pull the community together and get them to support Marshall football even when they are losing? Burt Reynolds walks a fine line of serious and outlandish behavior with a comedy that makes us root for him. Reynolds plays a convict who is instructed to put together a football team of cons to take on the guards who are in some kind of prison league. It is more about power and the ability to take on authority than it is about the actual game sometimes, however a good hour or so is devoted to the training and the game so it makes the list. Also, the football action is very good for its time and doesn’t portray anything inaccurately. The fact that there was remake with Adam Sandler is the only flaw. Before “Friday Night Lights” was made into a television show but after it was a book, Billy Bob Thornton played the coach of a popular high school football program in Texas. Players are pushed to the limit and although it was a true story, we still are biting our nails when the final act plays out. There was some artistic license taken, however it is forgivable because it makes for a better movie. This was a no-brainer. It is the “Hoosiers” or “Field of Dreams” of football movies. I am in no way a Notre Dame fan, which may be the only downfall of the movie. Sean Astin was perfectly cast and I tear up every time I see the ending because we see the progression of how hard this kid worked to just get on the field one time. Also, Jon Favreau’s character is hilarious and we see an early, douche bag role for Vince Vaughn.

There are certainly some other candidates that didn’t make the cut, but I do want to mention them and why they are not on the list. “Any Given Sunday” was a bit over the top for me and also any professional football that doesn’t get the NFL license loses points. That is also the same reason “The Replacements” isn’t on the list. It doesn’t hurt that it has a lead actor, Keanu Reeves, who isn’t aware he is making a movie sometimes. “Jerry Maguire” isn’t really about football, nor is “The Blind Side.” So that’s my list, what is left out? Let us know what is more epic and should’ve been mentioned.