Joseph Gordon-Levitt on Sandman Being Suited for Film 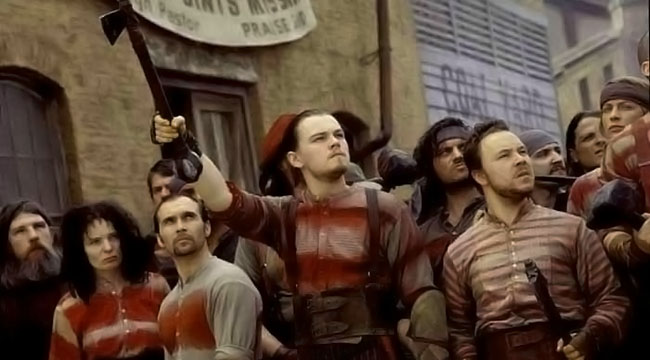 Green is the color of many things. In Hollywood, it is generally associated money, the thing that makes movies and what those movies are judged upon. To us, the movie going public, green is the traditional color of Irish things and more specifically, St. Patrick’s Day. Conveniently, that day is right around the corner.

We thought we should celebrate by recognizing a handful of epic Irish movies. This list will have movies not necessarily made in Ireland or about Ireland. The list includes films that have Irish themes and some characters that are Irish. Let’s be honest, there aren’t a ton of movies that have Irish ties so some of these are going to be quite a reach, but give us a break.

This could be the longest reach. The only real tie to anything Irish is that Rudy wants to play for the Notre Dame Fighting Irish football team. However, it has a common theme that many movies in this list will have. That theme is one that Irish nationalist Thomas Davis described when he said, “It is not blood that makes you Irish but a willingness to be part of the Irish Nation.”

One of the greatest movies that no one is allowed to talk about is “The Crying Game.” Alright maybe not the greatest movie, it has a twist that is not to be mentioned around those who may see it. The movie opens with a botched kidnapping, when one of the kidnappers grows fond of the person who he is supposed to be keeping a watchful eye on (Forest Whitaker.) He agrees to let him go on the condition that the man must go to London and seek out his girlfriend. Though most of the second half of the film was shot in London, the memorable opening act with the kidnapping was shot in Ireland. That makes it Irish enough to make the list. I won’t mention anything about what happens in London.

Though it is a well known fact that this Martin Scorsese drama is based on the Chinese film, “Internal Affairs”, this film won four Academy Awards including Best Picture, Best Director and Best Adapted Screenplay. It has Irish themes running throughout and the main plot line is about an Irish-American gang in Boston. There is Irish music sprinkled throughout the film’s score and the actors do a fine job of making us feel like we are in Ireland with some barely noticeable Irish accents. The basic story is about a young man who grows up in the mob but ends up becoming a police officer. At the same time, a newly inducted police officer is given an assignment to blend into the Irish mob so they can take out the head man played by Jack Nicholson. Everyone begins to smell a rat and it’s a race to find him.

The film begins in 1846 but quickly jumps to 1862. The two principal issues of the era in New York were Irish immigration to the city and the Federal government’s execution of the ongoing Civil War. These issues come crashing together by the time the climax rolls around and it feels like everything is meshed together very well by director Martin Scorsese. The film was nominated for ten Academy Awards including Best Picture, Best Director, Best Original Screenplay, and Best Actor for Daniel Day-Lewis’ portrayal of Bill “the Butcher.”

“Fantastic Beasts and Where To Find Them” Will be a Trilogy

The final film on the list is the story of Irishman Christy Brown who suffered from cerebral palsy and could only move his left foot. Brown is played by Daniel Day-Lewis who won his first Academy Award and plays him with a magnificence that transcends acting at some points. The film itself can run too close to being self important at times, similar to a movie like “The King’s Speech” but overall it is a great watch and entertaining. It was a tough call to choose between this and “Gangs of New York” because Day-Lewis is so tremendous in both, however this movie is much more Irish feeling and so it takes the top spot on this list.

How about you? What do you think is the best Irish themed movie? I know I may have skirted around some great movies that were made with Irish money or made totally in Ireland, so let me know what I missed. From everyone here at Conslayer, Happy St. Patrick’s Day!