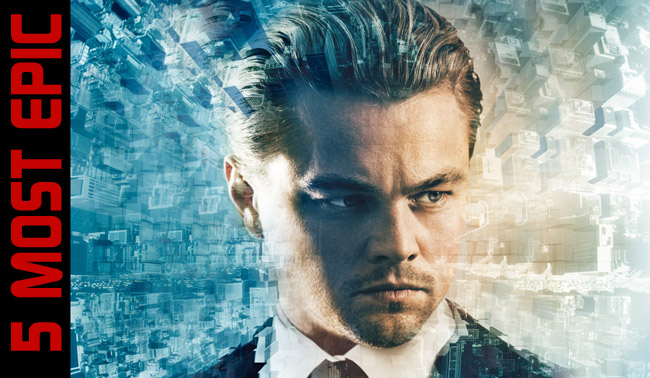 Leonardo DiCaprio won his first Golden Globe for his role in “The Wolf of Wall Street” and is in the Oscar hunt for Best Actor. However, this isn’t his first movie that has garnered critical and audience approval. This got us thinking, what were his most epic roles and the most epic movies he’s been in? There are many movies that could have easily made this list, especially some of his earlier work. However, we decided to limit this top 5 list to his more recent work.

5. The Wolf of Wall Street

It’s not easy to carry a movie, especially a three hour long Martin Scorsese movie. However, Leo pulls it off in this story about the rise of a billionaire who owns a stock trading firm. The antics that go on around him are played off very well by DiCaprio and he is funny which gives some of the story a rounded edge. There were more than 500 uses of the F-word, many of which used by DiCaprio’s character, however viewers never can come to dislike him.

Whether you liked Quentin Tarantino’s latest efforts as a whole, one of the things that people can agree on is that DiCaprio went for it. There was no holding back in his portrayal of Calvin Candie, the owner of a brutal plantation filled with slaves known as Candieland. Much of this was difficult to watch but the character of Candie was so interesting that we couldn’t wait to see what he would do or say next. The film was nominated for five Academy Awards, however Leo’s performance was not one of them.

This cop drama won four Oscars in 2007 including the first for director Martin Scorsese and the big prize of Best Picture. It is a remake of the Chinese film, “Internal Affairs” and is about an undercover cop played by DiCaprio who infiltrates an Irish gang and a mole in the police department who works for the same gang, played in the film by Matt Damon. They become aware of each other’s existence and it’s a race to find out who discovers the other person first.

The only problem I had with the film is that DiCaprio and Damon had the same hair cut and it was sometimes difficult to tell them apart immediately, but if that’s the only problem with a movie, it’s in good shape.

The most family-friendly movie in the list is “Catch Me If You Can,” which co-stars Tom Hanks, is directed by Steven Spielberg and is about a con-man who doesn’t know when to quit.

DiCaprio portrays a host of different people when his character pretends to be a doctor, lawyer, pilot and does them all with grace and with little effort. A fun romp around the world with a great performance by Hanks makes this movie high on the list. It may not be Leo’s most popular role or one that pops into someone’s head immediately, but every time this movie is on cable, it must be watched. There is something to be said for the ability to make a movie rewatchable.

I saw this film on opening weekend with a packed theater and something told me that I was going to be in for a treat. What followed was one of the most unique theater-going experiences of my life. When Inception, directed by Christopher Nolan, ended there was an audible gasp in the crowd followed by disgusted cries of “What?” and “No!” and I was able to see first hand how a movie can move people and I realized how perfect that movie was for the first viewing. Obviously, knowing what will happen makes future viewings not as enjoyable. Leonardo DiCaprio plays a man that has the ability to go into someone’s subconscious while they are asleep and steal information during their dreams. The stakes get higher and he is asked to do the reverse, implant an idea into someone’s subconscious. The movie grossed nearly $300 million.

That’s our opinion on Leonardo DiCaprio’s most epic movies. Let us know if you disagree with any selections or what your favorite Leonardo DiCaprio movies have been thus far from one of Hollywood’s favorite leading men.