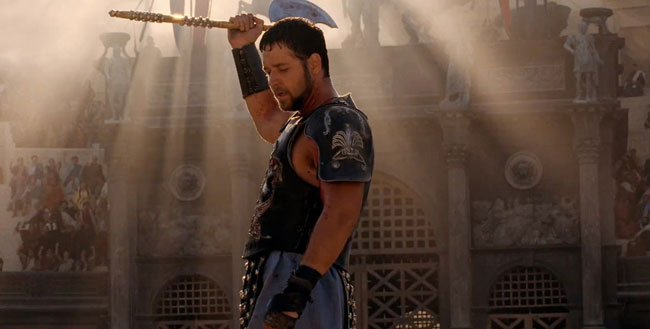 The 5 Most Epic Ridley Scott Movies

While known for his classic sci-fi epics like Blade Runner and Alien, Ridley Scott has managed to tackle several other genres in the realm of big-budget filmmaking over the course of his career. From gangsters to gladiators to war films, Scott has been able to maintain an impressive resume as an auteur. With his latest blockbuster The Martian opening this week, let’s take a look at some of the director’s most epic movies. Often referred to as “the black Godfather,” American Gangster tells the story of drug lord Frank Lucas (Denzel Washington), a heroin kingpin who imports drugs from the Far East to Manhattan in 1970s America. Opposite him is the detective Ritchie Roberts (Russell Crowe) working to bring him down. It’s part cop thriller, part mafia drama and also rivals the level of violence in Scott’s other films. There are brutal shootouts, pools of blood and even a scene where Lucas kills a man by smashing his head repeatedly with the lid of a piano.

Nevertheless, the film’s best moment is during a more quiet scene at the end when Roberts has finally apprehended Lucas. As both men are seated across a table from one another to negotiate a deal for Lucas to give the police names in exchange for a reduced sentence, Scott shows us two intelligent men with opposing perspectives regarding the American Dream. It’s a perfectly acted, written and stylized moment and is what makes this film so memorable. Released just five years after Braveheart, Gladiator is another grand warrior epic which is very loosely based on historical events. Starring Scott regular Russell Crowe as the titular protagonist Maximus, the movie tells the story of how he goes from Roman General to slave to the gladiator who restores Rome to its former glory. While his character is entirely fictionalized, the movie does somewhat explore the reign of the great Roman Emperor Marcus Aerelius (Richard Harris) and his son Commodus (Joaquin Phoenix), the latter being portrayed as the film’s classically sinister villain.

Though there’s nothing special about the movie’s plotting, Gladiator is nonetheless on par with The Lord of the Rings in terms of its visual flare. The chariot race remains one of my favorite scenes, right up there with the opening battle between Maximus’ army and the Visigoths and his final showdown with Commodus. And no one can forget the iconic “Are you not entertained!” line, which has famously inspired as many internet memes as the number of mutilated body parts in the movie.

In this Academy Award winning war film, Scott depicts the 1993 failed U.S. mission to Somolia to capture two top lieutenants of a Somali war lord. As the troops were met with a large resistance of rebel forces upon arrival, the mission became a disastrous fight for survival which Scott portrays to tremendous effect.

Like Saving Private Ryan, the film is an unabashedly gruesome display of war violence. After about a half hour of exposition introducing us to the core characters and providing some historical context, Scott takes viewers right into the heart of this brutal conflict for the duration of the film. With an all star cast composed of the likes of Josh Hartnett, Ewan McGregor, Tom Sizemore, Eric Bana, Sam Shepard and many others, Black Hawk Down is certainly one of Scott’s most emotional, exhilarating, intense and powerful films to date. Now for the one that made all of us wet our pants the first time we saw it. Perfectly fusing together elements of horror and science fiction, Alien chronicles the voyages of a space crew aboard the vessel Nostromo. After searching for survivors on an unexplored planet, the crew leaves only to find that a deadly life form has followed them.

The creepiest and most iconic scene is of course when the alien bursts through a man’s chest while he’s eating dinner, a sequence which was brilliantly parodied in Mel Brooks’ Spaceballs a few years later. Combined with the stellar screen presence of Sigourney Weaver’s character Ripley, one of American cinema’s most iconic heroines, Scott uses the confined atmosphere and relentless violence to create one of the best horror films of all time. Why there is a sequel for this film in the works is beyond me, but the original remains a true gem for any movie lover. Based on the Philip K. Dick novel Do Androids Dream of Electric Sheep?, Blade Runner stars Harrison Ford as the android-hunting agent Rick Deckard, who is forced out of retirement when four replicants escape from an off-world colony to Earth.

Between its cyberpunk aesthetic, merging of film noir and science fiction and revolutionary special effects, Blade Runner of course became a model for countless other science fiction films that came after it, from Dark City to The Matrix. It’s easily Scott’s definitive masterpiece and remains a staple of this genre. Let’s just hope the sequel will serve a clear purpose.

Conclusion: There are plenty of other Scott movies we didn’t discuss: Prometheus, Kingdom of Heaven, Thelma and Louise and many more which make him one of the most iconic Hollywood filmmakers. What are your favorite Ridley Scott movies? Sound off in the comments below!