This Aela the Huntress Cosplay Is Here To Steal Your Heart 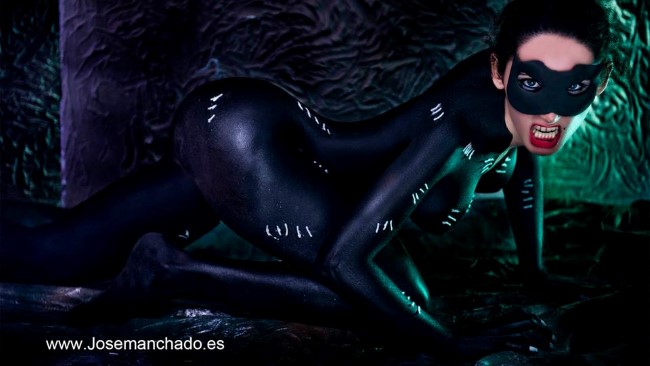 A Leather Bodysuit was Never Tighter than with this Catwoman Cosplay Selina Kyle, better known for her alter ego Catwoman, is the sexy, feline, femme fatale of the Batman series. She has made many appearances throughout the years, from comics to movies. First appearing in 1940 in Batman #1 and known only as “The Cat”, she is a high-stakes jewelry burglar. She continues to appear throughout the series and ends up having a love-hate relationship with Batman. With such a complex relationship, she adds another dimension to the Batman comics and with such popularity she ended with her own movie and comic series. Cosplayer Morgana Cosplay and body painter/photographer Jose Manchado have come together to create a beautiful Catwoman. Jose Manchado executes the paint job flawlessly, turning Morgana into a Catwoman with the tightest bodysuit you can get. The outfit is a blend of Catwoman designs, with the stitching effect coming more from the Batman Returns Michelle Pfeifffer style Catwoman. The more simplistic mask instead of a full head piece comes from the latest movie Catwoman in Batman: The Dark Knight Rises with Anne Hathaway’s rendition. It could also come from when Catwoman wore a green bodysuit back in 1967. Yes, green. But thank goodness we had the more traditional black Catwoman as it is much more feline than the green variety. Morgana Cosplay takes on Catwoman’s personality well, adopting poses filled with feline grace and sexy curves. Having a fierce, yet playful expression, she is the high-stakes thief we all know and love.