CC Cosplay is a Vibrant Beauty

Spunky Rikku Cosplay Has Fun in the Sun 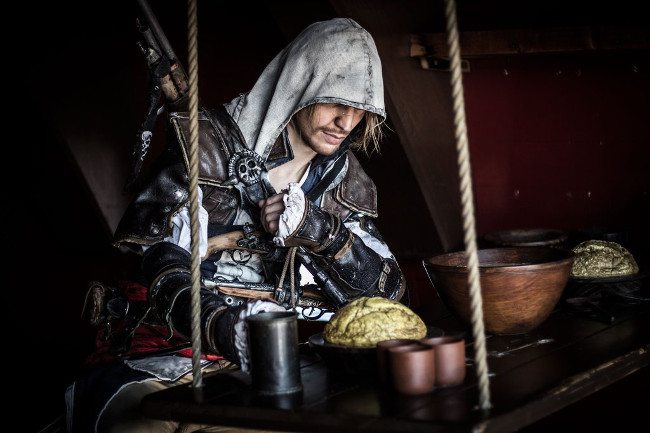 The time has finally come for all of you assassins ready to knife some pirates. Assassin’s Creed IV: Black Flag has finally been released for Xbox 360 and Playstation 3! On this new adventure, Black Flag follows the story of Edward Kenway, Connor’s grandfather and British pirate who eventually becomes initiated into the Assassin Order. Embarking on Kenway’s adventure, we will be able to explore the beautiful Caribbean islands, adding endless amounts of bloody assassinations to the lovely surroundings.

As the Assassin’s Creed franchise is one of the most beloved franchises in gaming, it has provoked many assassin-inspired cosplays. Whether being Ezio Auditore, Desmond Miles, or Ratonhnhaké:ton (Connor), we have seen amazing versions of these characters by both male and female cosplayers alike. Now with the addition of Black Flag, we are sure to be seeing numerous cosplays of front-man Edward Kenway hit the scene, but could they possibly get any better and more realistic than this epic cosplay by Rick Boer?

Rick masterfully takes us to the world of Assassin’s Creed, bringing us aboard his pirate ship and placing us directly in a jungle-filled landscape that gives off the Caribbean vibe perfectly. His costume appears to be slightly dirty and worn, as any true assassin who has been placed in death-ridden battles would be, giving an added touch of realism. Every bit of leather is in place, and not even the most minor details have been spared in his re-creation of Kenway’s costume, making this indefinitely one of the most amazing Assassin’s Creed cosplays to be seen thus far.

Rick has more amazing cosplays that are definitely worth checking out, including a recreation of Metal Gear Solid’s Snake, which can be found at his Facebook page.