Sultry Silk Cosplay Will Catch You in Her Web 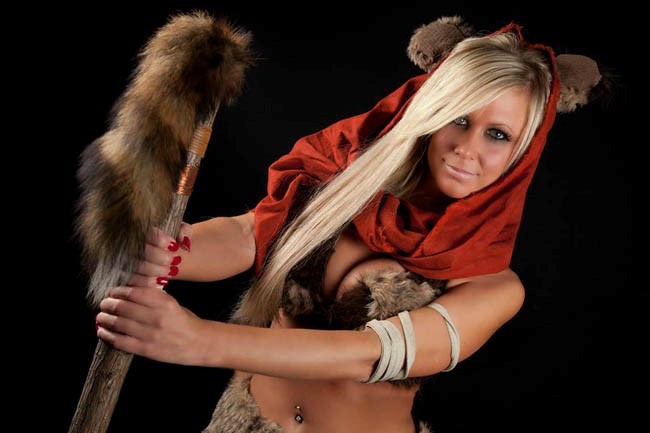 There have been quite a large number of Juliet Starling cosplays created by avid fans ever since the game launched a few years back; however, when we first spotted Jessica Jane’s Juliet, we thought she looked straight out of the video game.  She captured the entire essence of Juliet, rather than merely putting on a costume.  After watching Jessica’s journeys through cosplay, we noticed how talented she was and how dedicated to her craft she was becoming.  Jessica Jane is definitely a force to be reckoned with in the cosplay community, and we are glad to announce that she is one of our newest members of the All That’s Cosplay staff.

To get our readers familiar with Jessica, we sat down with her and asked her a few questions.  Get to know Jessica Jane by reading the interview below, and be sure to follow her on Twitter and Facebook.

ATC: For anyone who may not be familiar with who you are, give a brief bio on yourself.

JJ: My name is Jessica Jane (call me Jess) and I am addicted to shoes. I’m your normal girly girl who loves anything pink and anything that sparkles. Ok- so I’m not really your typical normal girl. Everything I’ve just said is true, but, there is much more to me than meets the eye!!

I love playing video games, reading, watching cartoons or anime, love crafting, anything in the sun, architecture (especially old ruins), love history, wine, animals, taking photos of things I see beauty in, going to the movies, and oh… Of course dressing up! Especially dressing up and cosplaying!  Which, I’m sure, is how you found me.

I try to make all of my costumes (I say try because I can’t sew for a damn) but I’ll be the first to admit I do commission some things. My favourite part about creating is the props. I LOVE prop making!!

Random fact about me is I have a chinchilla named Pikachu. Want another? I’m a licensed cosmetologist. But really I am quite normal & fun to be around. I love laughing and making other people laugh. I truly hope to get a chance meet you all at cons and hang out. I’ve only been doing this a year with only a few costumes under my belt but I plan on being a busy bee this year because you all have been so kind and given me encouragement to push forward! ATC: We have seen you come out with many incredible cosplays over the past few years, but what inspired you to start cosplaying?

JJ: I attended my first con (C2E2 2013) and everyone was so friendly and cool. I had so many people telling me that I was a great Juliet, asking which cosplayer I was so they could follow me and future projects of mine. I was so very flattered. I had no idea of the convention scene really til I had went to one myself. The people, the costumes, the booths… I was hooked.

ATC: While we love every one of your cosplays, is there one specifically that you feel you have a special connection with?

JJ: Honestly… My Pyramid Head. Ive been a SH fan since the beginning (sadly missing out on some of the games due to being console specific) and I will continue to create more. I love PH because of the shear strength in his character. No fear. Unstoppable. Being able to turn it into a female version, I felt like a powerful, terrifying, creature with a touch of femininity. Seeing everyone’s faces when I lifted the giant helmet up and they realized I was just a small girl under this massive construction of a costume wielding a 40lb giant knife in the air. It was badass. I was badass haha

I don’t think I’m these characteristics… but I was in the costume. But isn’t that what cosplaying is all about? ATC: With every cosplay you create, we see great improvement in your costuming abilities. As you continue to become more and more fluent in costume-making, what is the one cosplay that you are aiming to create one day?

JJ: TONS OF WORLD OF WARCRAFT! Oh my gosh! The armor! The weapons! ….. must sell soul for lots of worbla haha.

Its not just one.. I want to recreate my own toons. They kinda are a part of me.. so how cool would that be to actually strap on my own armor?!

ATC: On top of being a cosplayer, you have professed to being an avid gamer. What game was the spark that made you obsessed with video games?

JJ: Silent Hill. World of Warcraft. Its only ever been a obsession with those two. Otherwise I’m a gamer with A.D.D… I have a hard time playing a game to the end before starting another. Maybe that’s why I’m a huge WoW fan. Always something new to do and see.

ATC: Do you have any advice for cosplayers who are just getting started?

JJ: Gosh.. Have fun. Don’t stress. Quite simple really. This is a fun hobby (for most). Keep it that way.

Also don’t let harsh words bring you down. Some people in this world want a rise out of you, but don’t give it to them.  Smile at them and move on.

Get Wild with this Epic Jinx Cosplay

ATC: Now, there is one question that must be asked: Horde or Alliance?

JJ: ALLIANCE FTW! (I have one Horde… it was a faction change I regret. Sorry guys haha) Keep checking back to All That’s Cosplay to see more of Jessica Jane as she will be providing you all with tons of epic content in the near future.