Master the Art of Seduction with Yoko Littner Cosplay 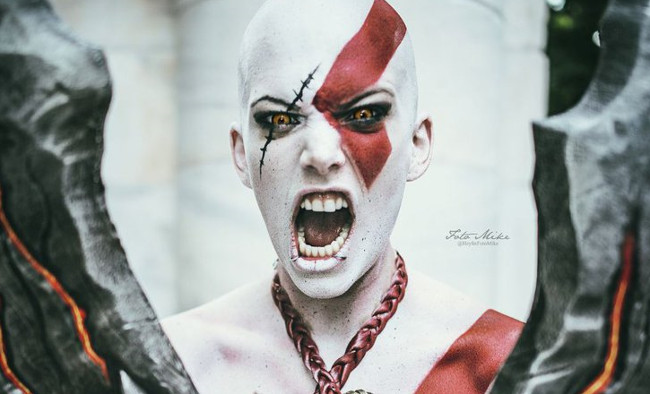 An Epic Female Cosplay of Kratos from God of War! God of War is an action-adventure, hack and slash video game series based loosely on Greek mythology. The game is appealing to many people due to the diverse elements that players encounter, including combo-based combat, platforming and puzzles. The player assumes the role of Kratos and battles enemies who stem from Greek mythology, including minotarus, centaurs, cerberuses, cyclopes, Medusa, Hercules, and much more. Kratos was born a Spartan and he held the military rank of General. He was betrayed by the Olympians and is seeking revenge. He can defeat his foes with his Blades of Chaos, a pair of blades which are attached to chains that are wrapped around his arms, or his Blade of Artemis, an epic large sword. He also has some crazy magical abilities, Zeus’ Fury, Medusa’s Gaze, Poseidon’s Rage, and Army of Hades, as well as a special ability called Rage of the Gods. Kratos is extremely cruel, destructive, and ruthless. But deep down inside, his decisions make him feel guilt, which leads to rage, denial, and even thoughts of suicide. We are truly impressed with Miss Sinister Cosplay’s take on Kratos. It’s intimidating how accurate her body paint and makeup is. Her armor and accessories are perfect and her Blades of Chaos are incredibly detailed. Not to mention, the innovative photography adds to the Greek mythology elements of this costume. MissSinisterCosplay has a thirst for vengeance that can be seen in her eyes. The way she carries herself and emanates rage really gives this cosplay an authentic feel. If we have anything to say about it, this gender-bend Kratos cosplay is a success!

Hey cosplayers! Want a feature of your own? Submit your photos to our Tumblr page or attach them in an email to [email protected]slayer.com for a chance to appear on our site!