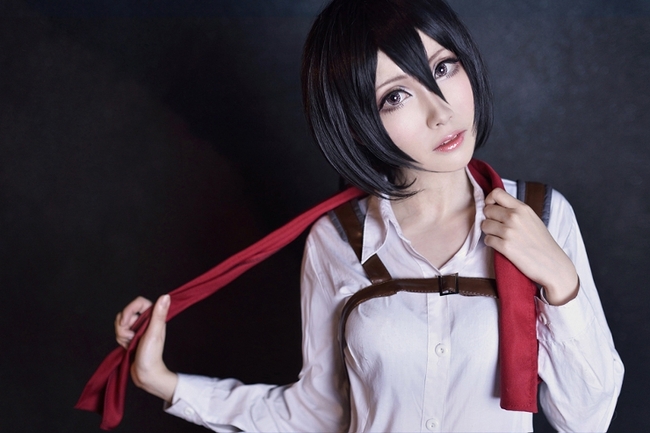 Attack on Titan is an anime that’s popularity seems to be ever increasing. While some might believe that Netflix is to blame – allowing those who wish to watch it do so for free, there’s no doubt that word of mouth has also helped spread the existence of the cosplay like wildfire. Whatever the reason for getting into the anime, there’s no denying that once you’ve began to watch it you’re hooked. With a concept that Attack on Titan delivers, giant humanoid Titans taking down whole cities with nothing to stop them, it’s hard to not want to see what the hype is all about. Shoot, even Lootcrate has indulged fans’ and helped increase the anime’s popularity by featuring them as March’s crate. Most might fight that Attack on Titan’s story solely revolves around Eren Jaeger, there are more than a handful of fans that believe Mikasa Ackerman is just as big of a player in the title, if not bigger. There’s no denying that without Eren’s determination to join the survey corps drove Mikasa and Armin to join, it is Mikasa’s sheer skill and talent that tend to get the characters out of tight spots. Mikasa Ackerman, Eren Jaeger’s adopted sister, has been through more than most see in their entire lifetime, and where most might have struggled to come through it all unscathed Mikasa becomes strong willed. By harboring memories from her dark past, Mikasa uses what could have been a dark energy and uses it to take down Titans alongside Eren and Armin.

Seeing such a strong female lead, though becoming more popular, may not be as common as one would like. While some might have the interpretation that women in anime are nothing more than their big boobs, and good looks Mikasa Ackerman goes against the grain. She is an ideal that girls can look up to, and with such admirable qualities – as well as Attack on Titan becoming as popular as it has, it’s no wonder that cosplayers have taken to donning Mikasa’s look. It might seem easy to throw together such an outfit, the truth is in fact opposite. MonCosplay, however, has made looking like Mikasa seem like an easy feat by not only getting the girl’s clothes right to a t, but also striking positions that resonate Mikasa. This is why we’re giving MonCosplay two thumbs up, way, way up, to MonCosplay on achieving such a flawless Mikasa Ackerman. What You Could Learn From ‘Heroes of Cosplay’