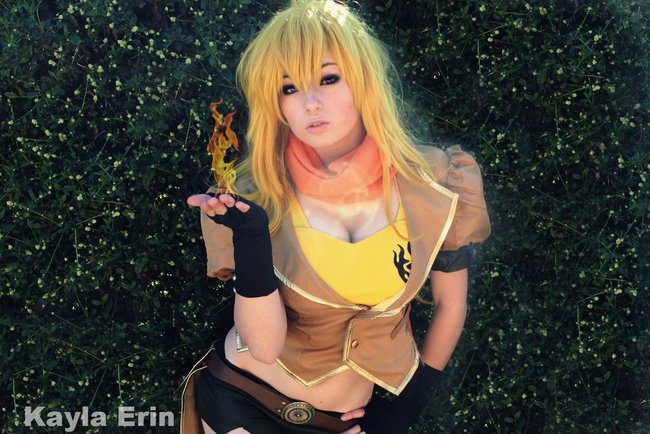 Meet Yang Xiao Long of team RWBY! RWBY, a new web-anime created by Rooster Teeth’s Monty Oum, has quickly become a favorite of Rooster Teeth fans and has also graced the top of the Crunchyroll list. Yang is the spunky member of RWBY and became an instant fan favorite after her character trailer was released. Yang was the fourth character introduced in the RWBY teaser trailers and everyone fell in love with her go-get-em attitude and fiery personality. Not to mention, she has epic fighting skills coupled with an awesome pair of shotgun gauntlets. All of the characters of RWBY have weapons that are “also a gun” and hers don’t fail to impress. Definitely watch out for this babe’s knockout punch! Australian hottie, Kayla Erin, brings us an epic Yang cosplay. She was one of the first cosplayers to tackle this cosplay and didn’t miss a detail. Kayla Erin has been cosplaying for a few years now and it shows. She has amazing craftsmanship as well as hair/wig and makeup skills. She cosplays mainly from different anime series, but has recently cosplayed as Spiderman’s Mary Jane. Don’t wait to check out this lovely cosplayer’s works!

Sif Cosplay is Ready To Do Battle