Last Life is given the Tim Schafer Seal of Approval 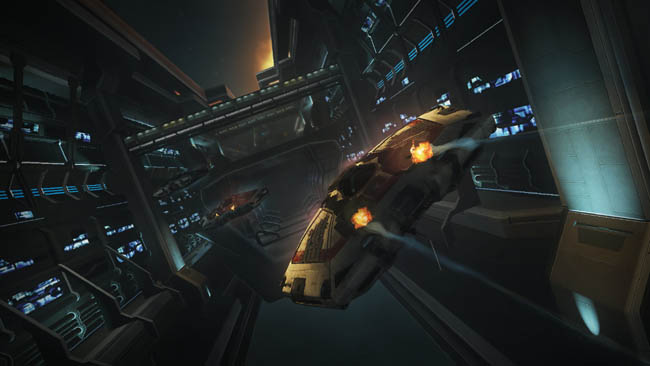 BAFTA Inside Gaming 2014: Hands-On with the Revolutionary Elite: Dangerous and the Oculus Rift Elite: Dangerous is an upcoming space trading and combat simulator that achieved crowd funding through Kickstarter back in January 2013. The campaign raised over £1.5 million and the game is about to move into the next stage of alpha testing. We got a chance to sit down with the game and not only see it in action, but to play using the revolutionary Oculus Rift virtual reality headset.

After becoming familiar with the set up I was tasked with using my radar to locate and destroy an enemy ship hiding behind a near-by asteroid. I had expected to find the whole Oculus Rift setup to be a bit overwhelming, but I was amazed as I looked around the cock-pit completely free of any inhibitions that would have otherwise left me feeling like a fool. Quite simply Elite: Dangerous is just a fantastic game, but playing with the Oculus Rift elevates it to the next level. What the talented folks over at Frontier Developments have been able to do is a true testament to the fans who initially backed their project.

After locating my enemy I initiated combat and proceeded to track the vessel across 360 degrees of explorable space. An intense dogfight ensued and the resultant explosion will go down in my personal history as one of the most exciting moments in my gaming career. I think video games offer us a sense of freedom that ultimately allows us to escape into a world the likes of which we know we can never exist within. Elite: Dangerous takes this to the next level and playing with Oculus Rift is in my opinion the finest way to experience it. Elite: Dangerous lead designer David Braben was at the event and he offered us the following insight into how Elite: Dangerous players have begun adopting the Oculus Rift virtual reality headset.

“Playing with Oculus Rift feels really immersive; we have our own technology at the studio so it was quite easy for us to add Oculus Rift support and it’s a great experience. I think nearly 10% of the alpha backers play on Oculus Rift and that was surprise for us. I think it feels very much like something new and I think that’s why we all wanted to engage with it, but what we didn’t want to do is distort the game for Oculus Rift because the majority of players are still going to play without it.” Braben then went on to explain how the studio implemented it into the game without intruding on the games overall design. “When you look around the cock-pit various displays might fire up when you look at them through Oculus Rift, but it does the same with controller, it’s a really good mechanic.”

I got a chance to sample this aspect of the game and I must say I was really surprised by how accurate the system is. With a quick glance I was able to bring up my power distribution and increase my manoeuvrability while tracking the vessel and then increase my firepower as I went in for the kill. I did all this by moving my head and flicking a button.

For anyone wanting more information on the game you should visit the Elite: Dangerous official website which is jam packed with amazing content, but beware; playing Elite: Dangerous might leave you rethinking your day job as you contemplate becoming a full-time space cowboy!