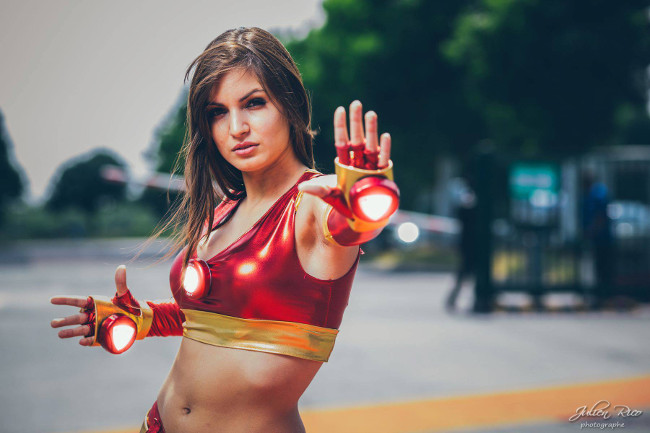 Tony Stark, the ultra rich engineer and alias of Iron Man, has been in the publics eye since 1963. First appearing in the comic Tales of Suspense #39, Stan Lee imagined him as a “quintessential capitalist” but also a wounded figure needing an artificial heart that battled against the Communists. Over time he grew as a person, becoming more complex and less focused on Cold War-related troubles. With the dawning of Robert Downey Jr.’s portrayal of the womanizing billionaire, Iron Man shot to a new level of fame. In the second Iron Man movie, Iron Man 2, a new set of beauties appeared, the Ironettes. A group of sexy dancers in Iron Man bikinis strutted their stuff to launch the festivities at the Stark Expo. Nuna Cosplay is marvelous in her Iron Man Bikini. Made of metallic gold and red fabric, her bikini shimmers beautifully. Gloves adorned with LED lighting remind us of Iron Man’s gauntlets which shoot his iconic repulsor rays. In the middle of the bikini top is another LED light which replicates Iron Man’s arc reactor. Nuna Cosplay flawlessly embodies the cheerful, prancing Ironettes as she showcases her amazing cosplay.