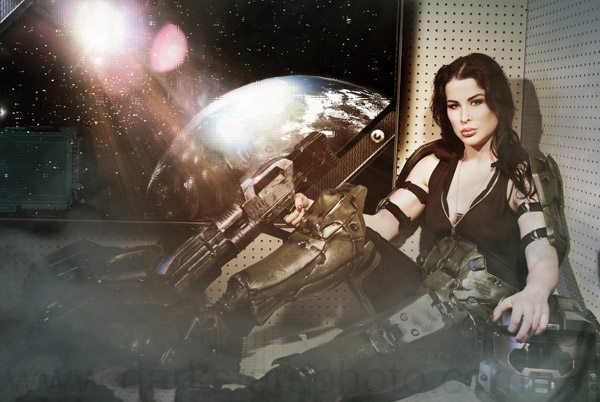 E3 is finally over. As excited as we were, it is also marked an end of an era, as a large amount of announced games will be releasing on next-gen consoles. Us gamers have had endless amounts of fun with Microsoft’s Xbox 360 console, giving us memories that we are sure we will never forget. In honor of such, and with a slight unwillingness to let go, we at All That’s Cosplay decided to feature some amazing cosplays based off of depictions of characters from the console that we have grown to love. Halo has been in the hearts of Xbox fans for quite a long time now, chronicling the story of one of the most iconic characters in gaming. Humanity’s most dedicated soldier, Master Chief will do anything in his power to make sure that his people and the ones he love remain safe. Generally quite tough and packed with layers of heavy armor, Master Chief is looking better than ever as portrayed by the beautiful Kami Kaze and with the help of the amazing photographers at Dark Stars. Mass Effect is one of those games that will never leave the hearts of many of us gamers.  As we followed the life of Commander Shepard, the first human to be able to join the Citadel’s elite force, the Spectres, we grew to love her (or him), and let’s be honest here, we loved those sex scenes too.  And although we know that the Mass Effect series eventually launched on both Xbox 360 and Playstation 3, it can be remembered that the 360 was its first home.  Cosplayer Angela Bermudez did an amazingly detailed Fem Shep costume in one of the best portrayals of the much-loved character that we have ever seen.  Thanks to photographer Andres H. for these awesome shots as well! Gears of War is another one of the Xbox 360 exclusives that gamers will be hesitant to let go of, but we are hoping that they will continue the franchise on the next-gen! Gears of War includes characters that we have come to grow quite fond of, but none of them contain the fine mix of beauty and strength that COG soldier Anya Stroud has. With the ability to both kill and love, Anya is a versatile, compassionate human being who can kick some major butt. Probably one of the most famous cosplays of Anya Stroud was created by talented costumer and avid gamer, Meagan Marie.  These photos are absolutely amazing, created with the help of the editing skills of Long Vo. Meagan’s depiction perfectly encompasses the essence of Anya Stroud. Yes, another Halo cosplay was necessary. There was no way we could forget the loveliest artificial intelligence, Cortana. Aiding Master Chief through his voyages every step of the way, Cortana made us love her for her loyalty and uncanny ability to have human emotions, and portray them with such feeling, even though she has no heart or blood pumping through her veins. Cosplayer Evie Evangelion created this stunning portrayal of Cortana using only body paint. Thanks Oldmacman  for the wonderful photos. With that, we close our montage in tribute of all of the amazing Xbox exclusive characters that have been re-created in human form through cosplay. As a new generation of Microsoft games is slowly but steadily approaching, we look forward to all of the new costumes that will emerge from the release of the new games. Check back with All That’s Cosplay as a “Best of Sony’s Playstation 3: Cosplay Edition” will be featured.