This Leeloo Dallas Cosplay is Action-Packed! 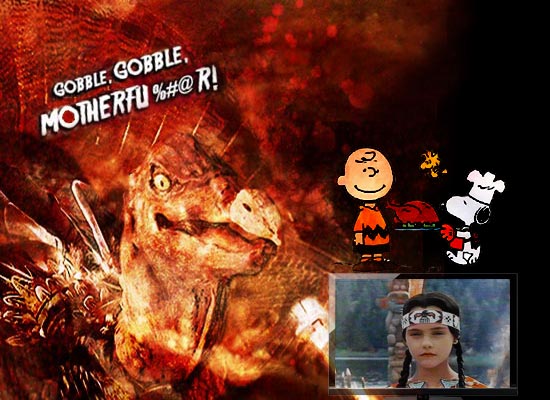 Thanksgiving is a time to be near family and to enjoy the delicious (hopefully not dry) turkey with all the fixings. We here at Conslayer understand that you have traditions, whether it may be Thanksgiving Day football, the Macys Parade, or avoiding your creepy Uncle Lester. To those looking for a cinematic escape, we bring you our list of some of the best Thanksgiving movies to watch as you slab extra gravy on your potatoes and turkey. Just don’t forget the cranberry sauce! In this film, Katie Holmes plays the lead role. She and her boyfriend Bobby (Derek Luke) invite her parents over for Thanksgiving dinner. When she realizes her oven is not working, she goes out of her way to try and make the perfect turkey for dinner in hopes her family does not fall apart. In the meantime, we follow the parents in Pennsylvania as they journey to the slums of New York. This must see is for the whole family as Peppermint Patty decides to invite herself along with all the friends to Charlie Brown’s for Thanksgiving Dinner. He feebily attempts to make dinner for his friends, and they all end up enjoying themselves as you should on Thanksgiving Day. Awesomely bad and strange, funny as well as horrific enough to give you the chills on Thanksgiving as a homicidal turkey runs around during Thanksgiving break and chops up college students. Turkie continues his murderous spree with Thankskilling 3 (it’s the only series to skip its own sequel). Now that’s epic! Neal Page (Steve Martin) is on a coach flight back home for Thanksgiving and meets up with the overweight, talkative salesman Del Griffith (John Candy). Things seem to go abruptly wrong and they are trying to hitch home in a train and a car while sharing a hotel room on the way there. Great laughs for all! Its Thanksgiving and Rocky (Sylvester Stallone) is off to Paulie’s (Burt Young) for dinner. Shortly thereafter, Adrian (Talia Shire) is convinced to go out on a date with the big lug. Even if Paulie had a little influence, the two hit it off and is one of Stallone’s best performances. Who listens to the Addams Family theme song, and does not snap their fingers along with? Addams Family Values is a great pick for Thanksgiving. The Addams kids are off to summer camps and do not like the fact they are in a politically incorrect Thanksgiving play. To say the least, they make it interesting and entertaining. Every year, this dysfunctional family gets together for the holidays. Well, after everything hitting the fan, including her daughter missing dinner to be with her boyfriend, Claudia Larson (Holly Hunter) is off to spend dinner with her parents. Can she survive the chaos of being in the same house with her estranged family?

These are some of our picks for the Best Thanksgiving Movies. What are your picks?