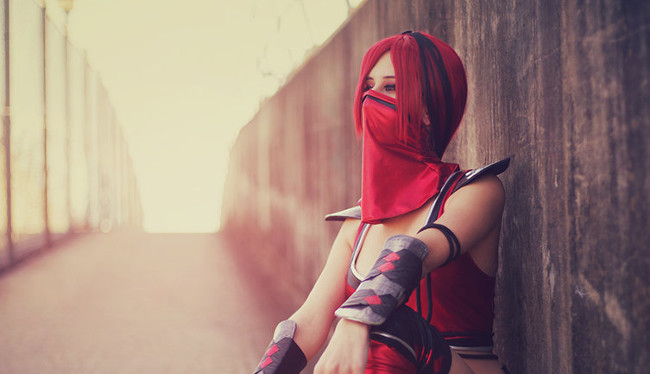 Shao Khan is known for his distrust of those under him, to the point where he trusts no one. No one, that is, unless he created them. Skarlet is one of these creations. A femme fatale created by fusing the blood of many warriors with sorcery. A bloodthirsty fighting vixen who gained strength from the blood of her enemies by absorbing it through her skin, she was kept in chains until Shao Khan was in dire need of her. One such time is at the Mortal Kombat Tournament where she was tasked to kill Quan Chi if he planned to betray her master. Luna Lockheart Cosplay gets ready for battle by donning Skarlet’s red and black two piece outfit. The crop top is paired with a revealing loin cloth-esq bottom. A red ninja mask, black armguards and knee high red boots finish off the costume. With red hair streaked with black tied back, she is ready for any enemy. Beethy Photography does a magnificent job of highlighting that almost emotionless look in Luna Lockheart’s eyes with her great photo taking skills. The Always Cute and Sexy Harley Quinn Stuns in This Cosplay!