Dragon Age Cosplay of The Witch of the Wilds, Morrigan 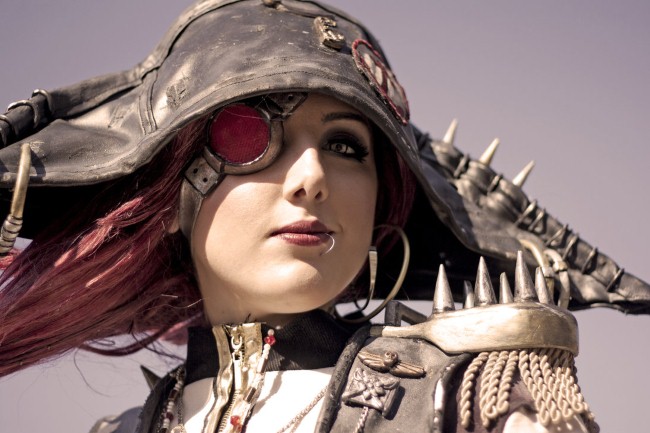 After pursuing a perilous quest for the lost treasure she seeks, Captain Scarlett meets the Vault Hunters and gives them the task of searching all high and low for the pieces of the compass. Upon completion, she directed them to Magnys’ Lighthouse to see where the compass would lead. The compass revealed a secret location in the desert sands, but instead of sending the Vault Hunters to the site, she went herself and dispatched a portion of her crew to finish off the Vault Hunters. She fights the Vault Hunters in the stomach of the beast, riding her pet Rakk Hive Roscoe who was swallowed by the Leviathan during her search for the lost treasure. When he was killed, she ultimately conceded defeat and fled the scene via personal teleporter. As she fled she left parting words saying that they would meet again soon. Whenever I see Borderlands cosplayers, I am in awe at the amazing work they put into their cosplays and making themselves look as though they just jumped out of the video games. Some of my favourites include Eve Beauregard, Guzzardi Art and Cosplay, WindoftheStars, and Canadian cosplayer Tarah-Rex. Not only do Borderlands cosplayers put so much effort into their work, they have an insane amount of fun doing so, in photo shoots and at conventions. You’ll see psychos running around being, well, psychos and doing the signature psycho poses, and Maya and Lillith cosplayers doing the infamous Siren fist-bump. They truly are a joy to behold. Tarah-Rex’s Captain Scarlett cosplay is jaw dropping and I was blown away the first time I saw it. The detailing on everything- the weapon, the wig styling, the pirate hat and even the makeup are astounding. To top it off, she’s teamed up with talented photographer, Shaylene Hebert, to do a Borderlands photo shoot in the middle of the desert….in the Borderlands. This, my friends, is a masterpiece. Check out some more epic Borderlands cosplays featured below!

A Tifa Cosplay Guaranteed to Cheer You Up!