This Bayonetta Cosplay is One Sharp Shooter 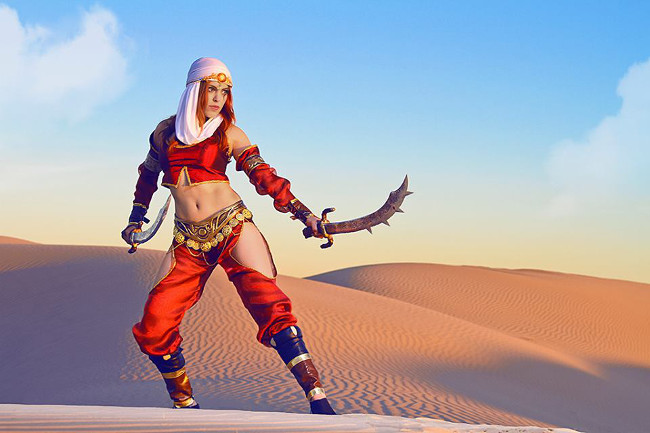 Brave the Desert with this Sandstorm Katarina Cosplay

Katarina always showed skill in battle. As the daughter of a Noxian general, she was afforded all the best in regards to training. Under the tutelage of the finest assassins, Katarina was quickly ready for her first mission. This mission would ultimately change the way she thinks, as her disregard for orders led to the slaughter of many Noxian soldiers. Furious at her mistake, she returned to the now heavily guarded camp she had visited previously. Fighting her way through the ranks of Demacian soldiers, she slew her original target and restored her honor. In the heat of battle however, she earned the scar that mars her face. Whether fighting in the forest or fighting in the desert, Katarina is always prepared. Cosplayer Nadyasonika dons Katarina’s Sandstorm attire as she prepares to fight under the hot sun. Her hair is covered in a white wrap featuring gold detailing and gems. Red top and matching bottoms are edged with gold details, calling forth the image of a belly dancer. Wielding her twin blades and striking fierce poses, Nadyasonika is an amazing Sandstorm Katarina.