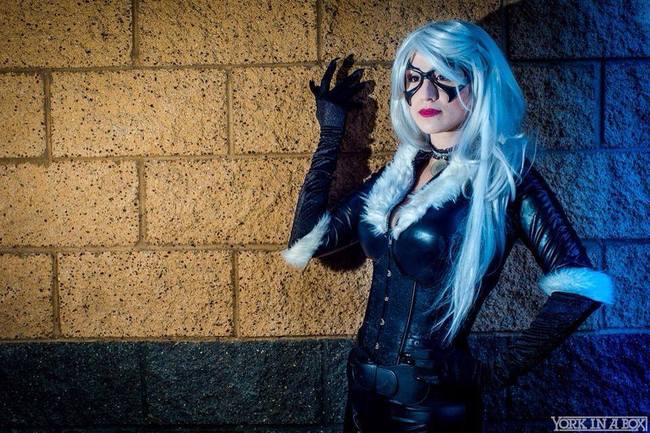 Photography by York In A Box

Felicia Hardy spent years and years stealing money to buy champagne and caviar instead of just stealing champagne and caviar. She had to lose it all to realize that everything was hers and all she had to do with reach out with her paws and take it for herself. Her father was a world-renowned cat thief. He implored his daughter to never settle for second best. If basketball was her thing, she should work as hard as she could to become a basketball player. During her early years in college, Felicia had gone to a party and was nearly raped by a drunk and disorderly student and then was saved by another student, named Ryan. Felicia and Ryan developed an extremely close relationship. Most of their time was spent together until one night Ryan demanded that it was time for their relationship to become physical. Felicia protested in vain and abhorring the idea of being a victim of rape, she made the decision to murder her rapist despite the consequences. She threw aside her studies and began training rigorously in various fighting styles and acrobatics. After months of preparation and training, Felicia set out on the quest for revenge, but before she could find him, Ryan was killed in a horrendous drunk driving accident. Felicia was infuriated that she was denied the chance to steal the life of the man who had stolen hers, and feeling reckless, she decided to put her new skills to good use and to follow in the footsteps of her father. Soon after amassing an immense fortune in stolen items, Felicia chose to adopt a costume identity. She first donned the Black Cat costume in order to break her father out of prison. On the same night, she bumped into our friendly neighborhood Spider-Man. Black Cat is a popular choice among cosplayers and being an incredibly sexy and fierce female character with an iconic costume, it is so easy to understand why. Miss Piratesavvy has a huge collection of cosplays from Domino to Thor, Mary-Jane and so on. Her cosplay of the sexy and stealthy Black Cat has epic written all over it and she’s even teamed up with Black Widow for some Marvel-lous photos!

Snipe Down Enemies with this Sinon Cosplay