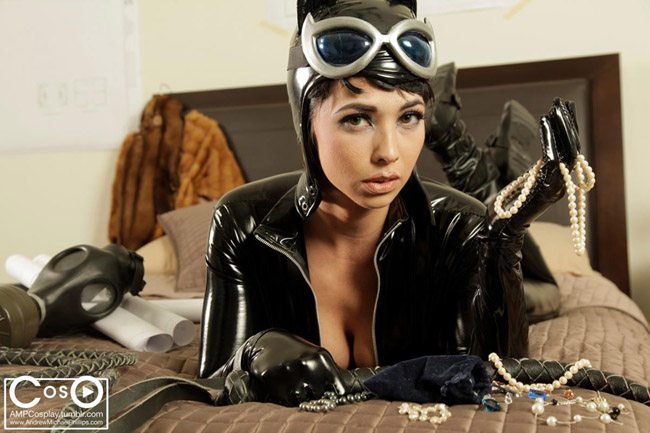 In recognition of Tuesday’s launch of Injustice: Gods Among Us, we have been featuring the game’s beautiful DC Comics heroes in cosplay form. So far we have covered Hawkgirl, Raven, and Wonder Woman. There are only two days left in our Injustice: Gods Among Us Week, but before it ends, it is obviously necessary that we cover the sleek, mysterious, and seductive Catwoman. Forced to choose between either living in a state home for delinquent children or on the streets of Gotham after her mother committed suicide and father drank himself to death, Selina Kyle chose the streets. Living on the dangerous East End of Gotham, Selina mastered her gymnastics abilities, took martial arts lessons, and enhanced her stealth skills in order to survive by being a cat burglar. Through all of her efforts, Selina Kyle earned a spot on Gotham’s Most Wanted list. It was not until Batman arrived on the scene that Selina started to sport her skin-tight leather suit and take on the persona of Catwoman. Although it may seem that Catwoman would be a nemesis for Batman, she actually lies on the border of good and evil, sticking to her own moral code and doing what she believes is right. Often times helping to defend Batman and The Justice League, Selina Kyle has honorable intentions and will always defend what she believes in.

It is known that Catwoman is, without a doubt, one of the sexiest females in the comic universe. With her bodysuit hugging to every curve and seductive attitude, one must have confidence and a rocking body in order to pull off a cosplay of her. Luckily for us, Margie Cox is able to perfectly embody the mysterious femme fatale in a way that makes us believe that she is the real Selina Kyle. For more of the beautiful Margie Cox, visit her Facebook page.

All Photos by: Dru Phillips