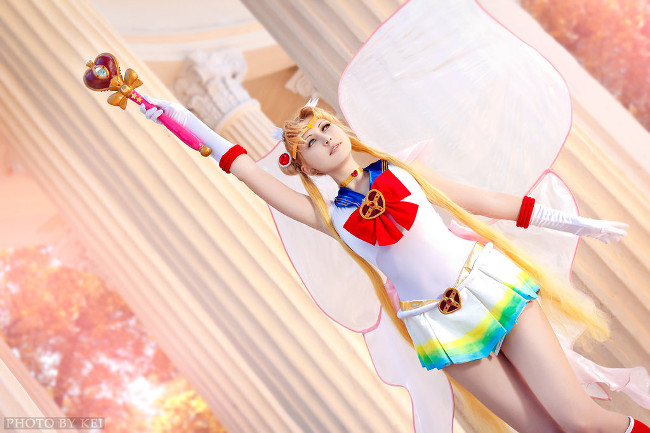 The popular television series Sailor Moon has been a hit all over the world. Originating in Japan and based off Naoko Takeuchi’s manga series, Sailor Moon has entertained audiences for years. The main character, Usagi known as Serena in the English version, is a normal school girl. Though lazy and focused on eating, she transforms into the evil vanquishing Sailor Moon. Possessing great powers and a strength coming from her love of all that is right and good, she stands in the way of the Earth’s destruction on multiple occasions. Cosplayer Usagi uses her brooch to transform into the legendary Super Sailor Soldier. In her iconic sailor outfit, Sailor Moon is ready to triumph over evil. Long blonde ponytails trail down her back, held up via red crystals. With white wing clips and her powerful tiara, Usagi’s attention to detail is amazing. Wielding the Spiral Heart Moon Rod Usagi is a force to be reckoned with. Photographer KeiTakasugi captures the magic inherent in Sailor Moon beautifully. Highlighting not only the craftsmanship invested in making the costume, but also the power emanating from Usagi.