This Cosplay of Black Cat is Absolutely Purrfect! 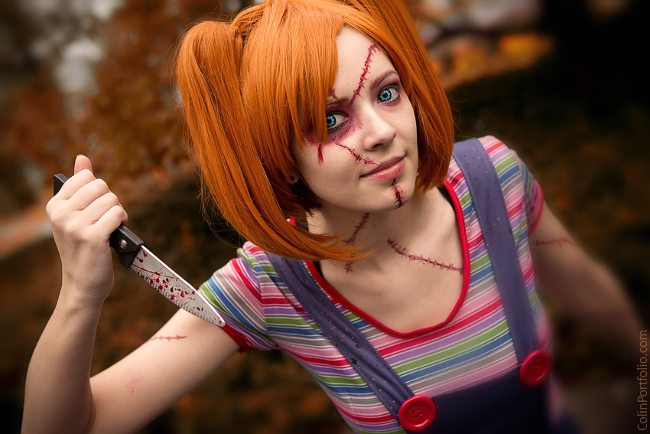 The smell of fear is in the cool crisp night air, as we grow closer to one of our favorite times of the year! We here at All That’s Cosplay have been hard at work to bring you guys some exceptionally horrifying cosplays that will evoke inspirational ideas for those of you who are diligently preparing for an epic Halloween. With a vast amount of great horror-themed characters out there, it may seem difficult to choose who you want to become this Halloween, which is why we have selected some of our favorites to share with you guys throughout the month.

For many of us who grew up in the 80’s, classic horror films such as Chucky had us checking under our beds in the middle of the night, and quickly marking off any dolls that were on our Christmas lists. The small redhead doll with baby blue eyes was unlike any other doll the world had ever seen, as it possessed the spirit of serial killer Charles Lee Ray who was known for killing a dozen innocent people to fulfill his voodoo ritual. If you did not have a fear of dolls watching you while you slept, you surely did after watching Chucky’s huge blue eyes slowly move as they followed his next unsuspecting target. PuppetsFall cosplay has crafted a magnificent gender-bent cosplay of the haunting doll that possessed our dreams so long ago. By changing Chucky’s Good Guys branded overalls into an overall-dress, adding red tights with knee-high red sneakers, and a red wig with peppy pigtails—PuppetsFall has created an impressive interpretation of Chucky. She has added important details to her cosplay that really bring Chucky back to life. She has incorporated his favorite weapon of choice, a bloody butcher knife, as a key prop for her cosplay. She has also created huge red cuts that go across her face and arms that appear to be real as they held together by staples—just like the ones we saw across the serial killer’s face in the Seed of Chucky. Of course, we love how she is staring manically into the camera with her almost glowing bright blue eyes, while she has her knife gripped tightly in her hand as if she will pounce at any moment! When choosing who you want to become for Halloween, you want to select a character who you find interesting and unique, so that it will have everyone talking about how amazingly unforgettable your costume was. Dressing up in a costume that you created for Halloween is a great way to get a taste of how fun it is to cosplay, and a gender-bent Chucky is a great choice for a character who you could easily closet cosplay as. Not sure what a closet cosplay is? You can check out our DIY section on planning your first costume to learn more about how to compile a great closet cosplay from cosplayer Rexluna. Now, close your eyes and count to seven; when you wake you just might be in cosplay heaven!

Sinon Shoots Us in this Amazing Cosplay