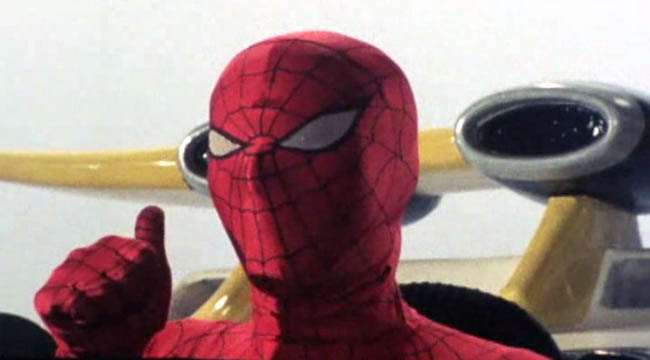 Comikaze 2015: Take A Peek At Some of Marvel’s More Obscure Movies

It’s no secret that the Marvel Cinematic Universe isn’t the first attempt Marvel made at making movies and TV shows about their various properites. Most hardcore fans remember the terrible Captain American movie in the early 90s and the Japanese Spider-Man live-acion show which was nothing more but a Kamen Rider/Super Sentai show with a Spider-Man coat of paint (and was more awesome for it), but did you know that there was a movie in which Spider-Man was a terrorist, and Captain America had team up with famous Mexican Luchador El Santo to stop him? This and many more Marvel TV shows and movies were discussed in a panel at this year’s Comikaze, hosted by Paula Gaetos of TokuNet, Mark Jaramillo of InSearchofMonsters.com, and moderated by Chris Eaton of The Realm Cast. First off, did you know that there were actually made for TV movies based on Captain America, starring famous B-movie star Reb Brown? Well, I did because I’m weird like that, but yes there were two movies based on Captain America released on TV in 1979, a full year after the original Superman movie was released. As Eaton said “it’s not a particularly good movie, but it’s one of those so bad it’s good movies”. Of course there was mention of the beloved Spider-Man series made by Toei (the same company that would later make Super Sentai, or Mighty Morphin Power Rangers in the States), but even as someone who was a fan of it, I learned quite a bit. For example, Toei’s Japanese Spider-Man was originally going to be an adaption of the original story, but the giant robot, Leopardon, to sell toys; it was also the inspiration for Toei to introduce giant robots into their upcoming Super Sentai series, “Battle Fever J”, or “Power Rangers” as it’s known here in the States. Unfortuantely, as Gaetos explained, “the suit was either damaged or destroyed, and as such, later episdoes were edited to use old footage from earlier episodes of the mech”, though this did allow Toei to humorously call Leopardon “the strongest robot ever”, since monsters never hit Leopardon and it took them out with one hit.

Finally, the big one (at least for me anyway) was 3 Dev Adam, a movie made in Turkey, which is infamous for ripping off ideas, characters, and even scenes from popular movies and comic books during the 70s. The plot of 3 Dev Adam is that Spider-Man is a international terrorist (yes, I’m not making that up) and so Captain America and El Santo, a famous Mexican wrestler, must team up to stop him. While Marvel is doing really good now with their Marvel Cinematic Universe, it’s clear that they had to break a few eggs to get that omelette.