Menacing Darth Talon Cosplay Will Lure You to the Dark Side

Jinx Cosplay is Sweet and Spunky 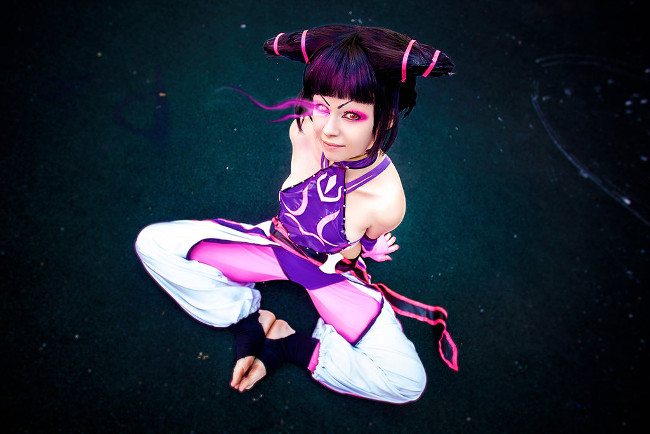 Cosplay of the Day: Juri Han Wants To Play!

There is always that one crazy little scoundrel in every fighting game who is ridiculously fun to play with, and Juri Han is definitely, without a shadow of a doubt, one of those crazy-fun characters who should be played when you must satisfy your need to dabble in frivolous evil deeds. This feisty and coquettish little bundle of energy lives by her own playbook, and she is not afraid to destroy anyone who crosses her path—including the exuberant sweetheart of justice, Chun Li, who finds Juri’s sense of justice to be a bit ludicrous. Even if you have yet to experience the epic power behind Juri Han’s powerful purple eye by spending an afternoon recklessly causing chaos, you might have secretly adored her wicked moves in the Street Fighter IV anime where you were able to experience the world through her eyes when she targets helpless bystanders, as she surrounds herself in a crazy pink energy that becomes so unstable that it instantly turns her into a small bomb. Ludicrous or not, Juri seems to have the ability to entice others to spend the day living on the wild side, including the talented cosplayer, Taorich, who has teamed up with photographer Svetlana Nekrasova to bring us these epic photos to enjoy! Taorich has managed to compile a spot-on replica of Juri Han’s purple, pink, black and white spider outfit. With black horned pigtails that are wrapped with two pink ribbons, a sexy purple dudou top that resembles a spider with its eight straps that meet in the back, and baggy white pants over her bright pink tights, Taorich should have you on the edge of your seat—hoping that her eye doesn’t continue to glow with more power!

Photography by Svetlana Nekrasova
[signoff2]
Hey cosplayers! Want a feature of your own? Submit your photos to our Tumblr page or attach them in an email to [email protected] for a chance to appear on our site!

Seductive and Ruthless: A BloodRayne Cosplay