Venture to the Dark Side with Darth Talon Cosplay 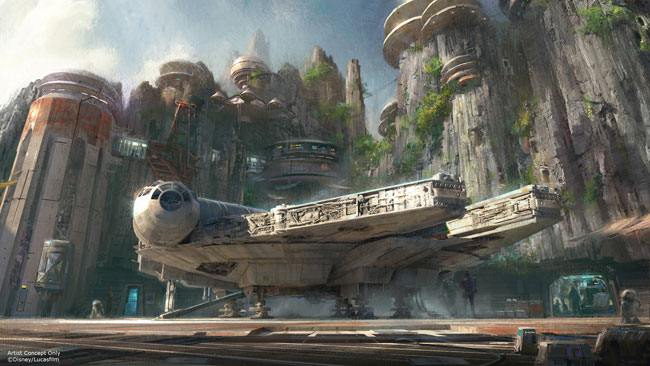 At D23 Expo today, Disney announced huge plans for major Star Wars themed expansions at two of their theme parks, Disneyland and Disney World. Disney chief Bob Iger revealed concept art for a few of the Star Wars-themed attractions, which you can check out below.

“I am thrilled to announce the next chapter in the long and exciting history between Disney Parks and Star Wars,” said Iger. “Through each new attraction and new land we create, we push the boundaries of what is possible. And as you can imagine, with Star Wars, we are taking that to a whole new level, with a whole galaxy to explore.”

Each land will comprise 14 acres, making them the parks’ largest themed land expansions ever. The expansions will attempt to immerse guests in the world and stories of the Star Wars Universe, and will feature iconic locations such as the Mos Eisley Cantina and the Millennium Falcon, with characters such as aliens and droids roaming the land.

The Star Wars theme park lands will feature two signature attractions, including the ability to pilot the the Millennium Falcon, and an epic Star Wars adventure that puts guests in the middle of a climactic battle.

Among the other Star Wars news during the huge fan event was the official announcement of Colin Trevorrow as director of Episode IX, a first glimpse at the cast of Rogue One: A Star Wars Story, and the reveal of a new poster for The Force Awakens, designer by artist Drew Struzan.