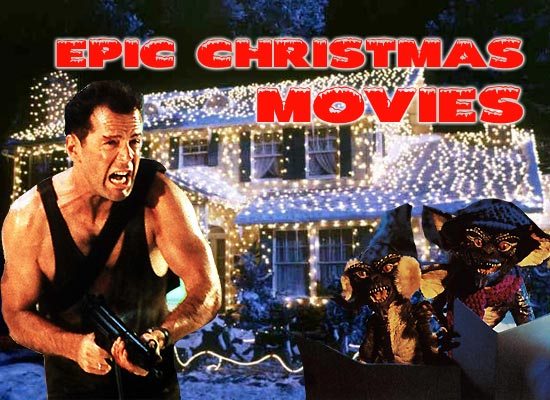 Whether you’re travelling or relaxing at home with your Christmas ham and pie (or your TV dinner), we bring you our list of epic Christmas movies to choose from. Many of them are family-family, but there are a few that should wait until the little ones are safely tucked away in their room for the night.

Our selection includes comedy, puppets, drunk santas, and even a few good action movies to snap you out of your food coma. Whatever the mood may be, we have you covered. So grab a second plate or maybe another slice of pie and enjoy!

In one of Bill Murray’s most popular films, Frank Cross, a television executive is haunted by three spirits come Christmas Eve. Even when his TV station is planning on live adaptions of Dickens’ Christmas Carol, he too must change based off the three lessons he learns from the three spirits.

Ralphie, young boy growing up in the 1940’s, has begged and still has not convinced his parents, teachers and Santa that he should have that Red Ryder B.B. gun. He is faced with my obstacles and Ralphie has a lot of work to do, even if an ugly leg lamp gets into conversation and puts Ralphie’s wants on the back burner.

Starring Chevy Chase, the Griswold family has plans, but as with any other Griswold vacation, it turns into one huge mess. Even when some family manages to be obnoxious, Clark keeps pushing knowing there is a reward at the end of it all!

Starring Will Farrell, Buddy is an enormously huge elf and is wreaking havoc in the elf community. Even though he was raised in the North Pole, he is off to the United States to find out who he truly is. Comical and highly entertaining!

A drunk, thieving Santa comes to town in this hilarious take on the Scrooge theme! Dysfunctional department store Santa Willie Stokes is a criminal who uses his role to rip-off stores, along with his Elf-sized partner-in-crime, Marcus. Will he find the Christmas spirit before the law gets him?

Tim Burton’s The Nightmare Before Christmas (1993)

Jack Skellington, king of Halloweentown, has discovered Christmas Town and yet, he is unsure of the concept. With trying to get all the others into Christmas, they can’t seem to get to get it all right.

Christmas Eve night, the children who do not believe are aboard a magical ride to only discover that Santa truly does exist. When you are on a journey of self-discovery, all you need to do is BELIEVE!

New York cop, John McClane is in L.A on Christmas Eve to reconcile with his wife, Holly. When terrorists Hans Gruber and his crew take over the building, cops are forced to save the guests and their Christmas.

In Die Hard 2, after saving an entire building, John McClane is in an airport and believe it or not, is at it again. Col. Stuart is holding the entire airport hostage and plan on rescuing a drug lord from justice. With control of electrical equipment, which affects the planes, McClane must act fast and land the plane before fuel runs out.

It’s Christmas time in Kingston Falls, and a mob of little green monsters are running amuck. A bank teller has accidentally released them after gaining a new pet and violating the no water and no food after midnight rule. What will happen to the town as these mischievous creatures are let loose on the town?

Tim Allen stars as Scott Calvin and when he hears clatter on the roof top, startling the big man in red, causing him to fall off the roof, Scott becomes the new Santa Clause. But can he commit to the job? With many people unsure of what is going on at home, he begins to “fill out” and look more like Santa Clause.

In the second installment, after 8 years of being the man in red that all the elves love, he seems to be losing weight unexpectedly. He finds out his son, Charlie (Eric Lloyd) is on the naughty list. As Scott leaves for home, a substitute Santa is put to work and Scott needs to return with a few tricks in his bag!

Batman on Screen: A Brief History of Batman Movies

Santa Clause 3: The Escape Clause stars Tim Allen and Martin Short as Jack Frost. Scott has a baby on the way and things seem to be running smoothly. Until Jack Frost shows up along with the Counsel of Legendary Figures calls an emergency meeting. Talk about trouble?

Lovable Macaulay Culkin and Joe Pesci star in Home Alone. An 8-year old boy is left at home while his family ventures off to France for Christmas vacation. Meanwhile, two hard headed crooks seem to get their ass kicked by a witty and smart boy saving his home for his family to return to!

In Home Alone 2, Kevin is in New York by his lonesome with cash and credit. In his own hotel, he is followed by those dirty Wet Bandits yet again. Can he beat them and gain a true meaning of Christmas while in New York?

Arnold Schwarzenegger and Sinbad star is this comedic family Christmas movie as they are off to find a must-have toy for their kids. When there is only one toy left, it is the battle of friendship or the love of their child.

How the Grinch Stole Christmas (2000)

Starring Jim Carrey, big budget remake of the Dr. Seuss classic is off to steal the hearts of many. With the same classical story, inside a snow flake is a magical land of Whoville. When Cindy Lou Who tries to win The Grinch over, he becomes a softy.

The Muppets tell their version of the holiday classic of the miser himself, Scrooge on Christmas Eve as he deals with the Ghosts of Christmas Past, Present and Future.

A modern and romantic twist on the traditional Ebenezer Scrooge story. Conner Mead, (Matthew McConaughey) a fashion photographer, heads to a wedding and begs his brother not to get married. As Mr. Conner Mead goes off and ruins a wedding, he is all for casual sex, until he is visited by three of his ghostly girlfriends from the past, present and future. When he awakes, he realizes he has screwed up. But can he fix it in time?