This Babydoll from Suckerpunch Cosplay is Beautiful

Horror Cosplay Friday: This Alma Wade Cosplay Will Make You Run and Hide! 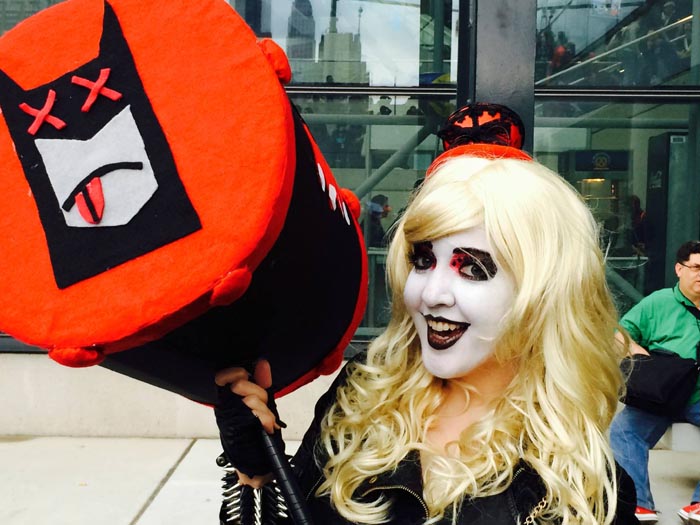 New York Comic-Con has bypassed big to become the biggest. This year, attendance reached over 150,000, surpassing San Diego Comic-Con as the most populous pop-culture convention in the United States. Not bad for a convention that pre-sold around 4,500 tickets in its first year in 2006. In a handful of years, NYCC has transformed from slightly awkward to full-on awesome. The logistical limits of being in New York City mean that NYCC may never reach the expansive, geeky glory of San Diego Comic-Con, but convention organizers ReedPOP did find a way to build excitement and take the convention into the city at-large with the addition of New York Super Week.

New York Super Week was a pop-culture festival leading up to and continuing through NYCC, with events taking place in all five boroughs that included concerts, raves, comedy shows, lectures, signings, trivia and other contests, cosplay and gaming parties, and even gustatory events for foodie nerds. Super Week mostly benefitted New Yorkers, nearby commuters, and those who’d planned a whole week’s vacation around NYCC. It was still nice to have so many opportunities to get your geek on, and, if anything, New York Super Week provided something of a consolation prize for people who weren’t able to snag tickets to the main event.

A comic-con of this size and caliber naturally brings in a host of big stars, excellent panels, and tons autograph/photo opportunities. There were also a lot more after-parties this year, both official and not, as well as a variety of smaller cosplay contests, and the official NYCC Eastern Championships of Cosplay – which is part of the global Quest for the Crown cosplay competition. Thousands of cosplay fans watched over 300 contestants compete, while millions more tuned in via the live stream. The first place winner and Eastern Champion was Michael Wong in his absolutely amazing dragon rider costume. We recently saw Michael take home the fan favorite prize at Wizard World Nashville as the Angel of Death from Hellboy. (Check out our coverage of Wizard World Nashville for photos of this incredible cosplay). The second prize went to Julian Keller as badass General Zod (pictured in our NYCC cosplay gallery). Third place went to Adrian Aroche as Skull Kid. The contest was judged by the fabulous Ashley Eckstein, Hondo Falco, and Ivy Doomkitty.

There were plenty of other notable cosplayers manning booths, hosting events, and serving on panels, but cosplayers certainly didn’t have to be “cosfamous” to make a big impression at NYCC. With thousands and thousands of people on the show floors at any given time, and many of them with cameras, simply wearing a great costume and getting into character allowed all dedicated cosplayers to be a star. Several first time cosplayers that we spoke to were amazed – and thrilled – at the positive attention they received while in costume. Some cosplayers or small groups would find a relatively open spot in front of one of the show floors and would let the photographers come to them. Others meandered from the show floor areas to a lower level outside, where professional photographers and press set up shop with lighting kits, tripods, video cameras, and interview equipment.

This outside area also afforded large groups an area for collective shoots. In honor of the 75th Anniversary of Batman, DC Comics brought in a breathtaking collection of Batman costumes, along with a stunning, bronzed Batman statue. Needless to say, there was a lot of DC and Batman universe cosplay, though not as many actual Batman cosplayers as one might assume. We did count over 20 different Harley Quinns, each one different from the next. Not that there’s anything wrong with that. In fact, just the opposite. The varied Harley Quinns capture an important essence of cosplay – finding a creative and personal way to embody a beloved character. Whether making the effort to perfectly replicate a costume and look from established cannon, or turning cosplay into a version of fanart come to life, it’s all for the love of good, cosplay fun. For more interpretive cosplay, look for ATC’s own Ireland Reid as an adorably sexy Pikachu and Gogo Incognito as a campy, vampy Catwoman.

Of course, there was no shortage of Marvel cosplay. Popular animes such as Dragonball Z and iconic Disney movies were also well represented, as was Borderlands, Doctor Who, and Game of Thrones. It goes without saying that there was a big group of Deadpools, some sticking to the iconic look, while others going the way of the mash-up. Crossplay was hugely popular, leading to some really creative and intriguingly sexy twists on genderbending (highlights include the male Mad Moxxi and female Salvador from Borderlands, the super sexy, femme Doctor Octopus, and the boys who perfectly recreated male versions of Claire and Moira from the new Resident Evil). It’s thrilling to see this trend growing, and for male cosplayers to be getting into it just as much as the ladies. It should also be pointed out that several of the most captivating costumes belonged solely to their wearers’ and creators’. Original characters definitely had their place among the Sailor Scouts and Star Lords. Perhaps most importantly, NYCC welcomed cosplayers of all races, ethnicities, and ages. Some cosplayers were babes-in-arms, while others were grande dames and silver foxes. Along with cross-gender, there were many cross-race cosplays. It was a very positive atmosphere, with good efforts made to make it safe and friendly by means of the Cosplay Is Not Consent rules. Large posters that displayed the Cosplay Is Not Consent list of rules and etiquette were placed prominently around the Javits Center, helping to ensure a good, safe time for all.

An epic time was had at New York Comic-Con this year, and we managed to grab photos of some of our favorite cosplay from all four days of the convention. Check out our NYCC gallery and let us know what you think.

Turn Up the Heat With This Lilith Cosplay