This Transistor Cosplay Glows With Beauty 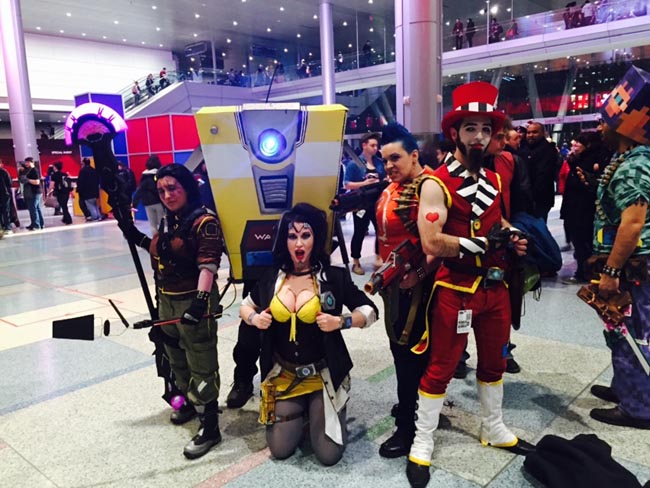 PAX East is one of three PAX events that take place over the course of a year. In 2004, the people at Penny Arcade decided they wanted a show exclusively for gaming. From that idea spawned a small, 4,500 person event in Bellevue, Washington, which has since grown to include PAX South in San Antonio, Texas and PAX East in Boston, Massachusetts.

PAX Prime (now in Seattle) and PAX East are now the largest gaming events in the country. As you might expect, gaming-related cosplay reigns supreme at PAX. Truth be told, there was less cosplay to be seen at this year’s PAX East, but was there was mostly excellent. As with last year, there were dozens of League of Legends cosplays. Riot Games didn’t have a booth this year, but they did sponsor the cozy, welcoming, and absolutely wonderful Cospitality Lounge. The Cospitality Lounge was a carpeted respite away from the bustle and crowds of the main lobby and show floor and offered coffee, tea, and water to refuel thirsty, tired cosplayers. Even better, the Lounge was packed with all sorts of fix-it necessities to help with broken or bruised costumes, such as paint, markers, and glue. Staff photographers were on hand to snap photos. All visitors were treated to a photo in front of a gorgeous backdrop, as well as two Polaroids – one to post on a wall with fellow cosplayers and one to keep. Riot also had a photographer on hand for a League of Legends-specific cosplay contest.

While some League cosplayers stuck to the original or most notable skins for their favorite characters, alternate skins and genderbend were especially popular this year. One awesome thing about League of Legends cosplay is that even if you’ve never played the game and know nothing of the various characters, you can still revel in the costumes, because they are fabulous!

Borderlands had a rather large showing of cosplayers as well. With The Pre-Sequel still relatively new and the Handsome Collection coming out, Borderlands was still fresh on a lot of people’s minds. Best of all, some lucky Borderlands cosplayers got the chance to revel with staff from Gearbox, including Randy Pitchford, and 2K at a private party, emceed by the one and only Game Over Greggy. A mini cosplay contest was held there, with every participant taking home a prize.

Of course, it wouldn’t be a geek fandom convention, let alone a gaming convention, without cosplay mainstays such as Legend of Zelda, Super Mario Bros., Halo, Resident Evil, Streetfighter, Silent Hill, and Minecraft. As nerdcore gaming often overlaps with a love of Doctor Who, there were numerous Doctors and related companions to be found at PAX East as well.

PAX does not allow booth babes at its conventions, but does allow cosplayers-for-hire to represent characters from the games being shown and touted. To that end, there was some serious eye-candy in the form of professional cosplayers at Smite, Overwatch, and Guildwars. There were also a few standout cosplays from Diablo, Bioshock, Evolve, and Far Cry.

Again, it was disappointing to see so much less cosplay this year, but the caliber of the cosplay almost made up for the lack. Hopefully this changes next year, and PAX East remains a convention that is welcoming to not just gaming enthusiasts, but cosplay gamers as well.