Retro Danger Mouse Cosplay is Ready to Save the Day

Epic Gnar Cosplay is on the Hunt 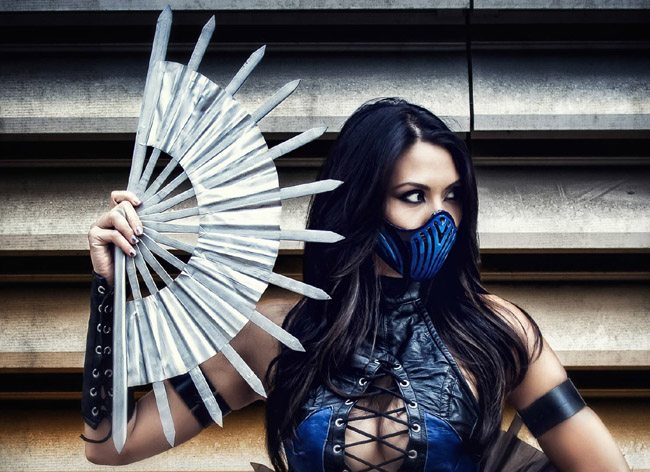 This Epic Kitana Cosplay Obviously Wins With A Flawless Victory!

How many of you remember spending every quarter that you could get your desperate hands on at the arcade, playing Mortal Kombat until you literally saw thick ketchup like blood splatters every time you closed your eyes? Who recalls spending countless hours mastering the precise timing of executing the swift: “Block, Down, Down, Down, Up, Low Kick” combo that would finish your most dreaded opponent with Kitana’s satisfyingly delectable, yet oh so fatal pink friendship cake? It was almost impossible to not stand there and laugh as you watched your adversary wobble around uncontrollably. Perhaps you are reading this right now, and you suddenly feel the urge to confess that you were one of those rapid button mashing machines who savored every moment of dealing your opponent the same painful swipe after swipe of Kitana’s classic fan swipe attack. You might have even managed to spice things up for a moment with a few blocks, and one of Kitana’s ground rumbling kicks before returning to repeatedly pounding “Back + High Punch” again until your friend called you out for being a cheap gamer. Fear not dear friend, you were not alone! Whichever type of Mortal Kombat gamer you were back in the day, you certainly have to remember those killer aches and small blisters in your fingers after an epic day of exceptionally brutal fights that often ended with heads flying off, exploding bodies, profuse vomiting of blood, ripped torsos, and the most epic flying ketchup-blood the world has ever seen! Of course, many of you may not have been able to enjoy Kitana’s glory in the awesome arcades of the 90’s. Perhaps you fell in love with her character in Mortal Kombat vs. DC Universe, or maybe you saw her in a comic book, or loved watching her on TV. There is even a possibility that you first saw Kitana at her big screen debut in 1995. Nonetheless, what makes Kitana such a magnificent character to follow through the years is just how much we have seen her evolve into the prized luminary she is today. At over 10,000 years old, she has effortlessly maintained a certain level of cataclysmic fighting skills, while still exhibiting an almost too tempting allure with her voluptuous beauty. Kitana has clearly earned her fame in the cosplay community where her character has been brought to life through various different interpretations by cosplayers who admire her charisma. Cosplayer Kimchi has managed to craft a remarkable version of Kitana, Princess of Outworld, which will surely seal her fate as being one of the best Kitana cosplays we have ever seen. Tarecgosa Cosplay Is a Stunning Vision