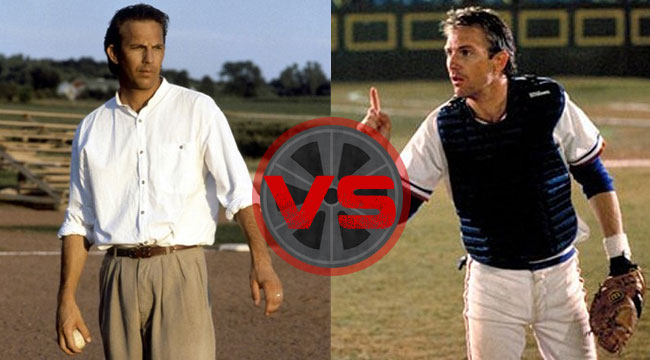 Welcome to our first Epic Movie Battle! In these pieces, we focus on two movies that are similar in some way, be it leading actor, genre, or release date. In today’s battle we will focus on two movies that feature both the same leading actor and the same genre. I’m speaking about two of Kevin Costner’s most memorable movies, Field of Dreams and Bull Durham. I will analyze and judge the two based on five factors: Plot, Acting, Writing, Directing, and Rewatchability. Ring the bell and let’s go in depth with these two baseball classics.

Field of Dreams: An Iowa corn farmer, hearing voices, interprets them as a command to build a baseball diamond in his fields; he does, and the Chicago Black Sox come.

Bull Durham: Crash is an aging minor league ball player, brought up from another team to mature a young pitcher with maturity problems. Both of them become involved with Ann, a baseball groupie with her own perspective on the game.

The plot of Field of Dreams is much more interesting and original. I like the simplicity of Bull Durham: a bunch of guys traveling around the minor leagues on a bus and a veteran mentoring a young guy but it gets stale by the third act. The groupie aspect seems tacked on and unnecessary. Meanwhile, Field of Dreams is more mysterious and the payoff is much more gratifying than the end of Bull Durham.

Kevin Costner is fantastic in both roles. However the supporting cast is much better in Field of Dreams. James Earl Jones is fantastic as always and Amy Madigan gives a realistic portrayal of the wife of a man who becomes completely obsessed with something as odd as building a baseball field. Ray Liotta as Shoeless Joe Jackson and the other players add to the list of great supporting characters. Costner is funnier in Bull Durham, even though he is called on to play the straight man at times. The problem is that when that happens, the other actor disappoints. The other actor is usually a young Tim Robbins, who is saved by great writing because his performance is too raw and careless. Susan Sarandon is average and her accent gets annoying.

This was a tough call considering both movies’ screenplays were nominated for Oscars and they were very different in tone. However, Bull Durham delivered on the tone it was going for a little better and there were multiple memorable speeches and moments that I still quote. I understand that Field of Dreams was more dramatic in tone, thus more unlikely to be quoted, however other than the “If you build it, he will come” or “You wanna have a catch” lines nothing is too memorable. Perhaps I am just a simpleton and need to accept that Field of Dreams is about more than baseball, unlike Bull Durham. However, without having the benefit of a novel to base the movie on (Field of Dreams is based on the novel by W.P. Kinsella) Bull Durham gets its point across while having some well written and delivered monologues.

This is a difficult decision, but in the end, the baseball action is captured very realistically in Bull Durham. I know the point of Field of Dreams wasn’t the action on the field, I just feel that the degree of difficulty for what needed to be shot was higher in Bull Durham than it was in Field of Dreams. Field of Dreams was fairly straight forward directorially and there weren’t too many memorable shots, other than the high crane shot of the cars lined up at the end.

For my taste, this one is hands down Bull Durham. There are so many lines that I laugh at every time, and I catch some new ones every viewing. For instance, the first few times I saw the film I missed this line, but it has become one of my favorite baseball mantras: “Relax, all right? Don’t try to strike everybody out. Strikeouts are boring! Besides that, they’re fascist. Throw some ground balls – it’s more democratic.” Field of Dreams is a great film and deserves to be stacked up with all the other great sports movies, however it just didn’t grab me and was too science fiction feeling at times, whereas Bull Durham is much more grounded in reality and something that could actually be happening right now.

Wow, these two proved to be an epic match-up when pitted against each other. Field of Dreams came out swinging, but Bull Durham withstood the early onslaught to deliver a knockout blow in the Rewatchability category. What do you think about the final decision? Do you agree with the thoughts here or would you have given the edge to Field of Dreams? Also, let us know what two films you would like to see matched-up against each other and broken down by the above criteria. Maybe your favorites will be our next Epic Movie Battle.