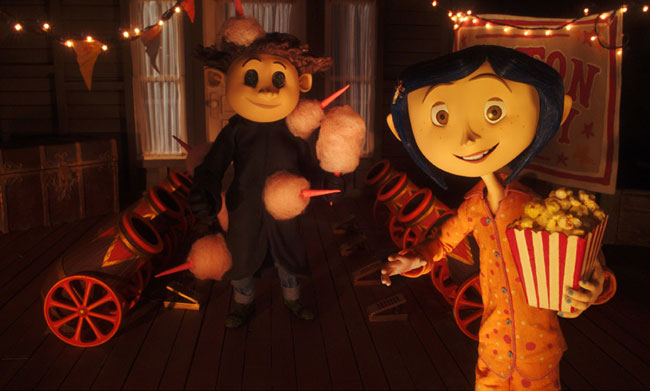 Last week I presented you with an epic list of alternative movie marathons in place of the standard Star Wars or Harry Potter marathons that will help you end your summer on a high note. But in case high-octane street racing, grand quests, slick spies and awesome guys named Jack aren’t enough for you, I’m here to suggest four more killer movie marathons. This marathon is pretty self-explanatory. By the end of the evening, your brain should either be fried or a goopier mess than when Agent K was swallowed by the giant cockroach alien. Start of nice and easy with Coraline, which is one part awesome and one part terrifying. It may be best to start that one during daylight hours. The second movie in the WTF Marathon is 2001: A Space Odyssey, which is less frightening than Coraline, but altogether more mind-meltingly baffling. Then, to recover from the slower pace of 2001, finish things off with Inception, which will be an action packed conclusion to your evening. All the other marathons have four movies, but the WTF Marathon only has three. Be nice to your brain. Comprised of both traditional noir and neo-noir movies, the Noir Marathon gives you all the sleuthing and puzzle solving that you could ever want from a movie marathon. L.A. Confidential is the perfect way to begin the marathon, and it is a perfect example of the classic noir genre.

After the classy detective work of L.A. Confidential, move on to some more modern sleuthing with Memento, and then Kiss Kiss Bang Bang, two exciting and funny movies that will get you ready for the conclusion. Gone Baby Gone is dark, gritty, emotional, and one of Ben Affleck’s best films. While the evening will end on a dark note, you have to save the best for last, and that’s exactly what you’ll be doing by finishing with Gone Baby Gone.

The Against the Odds Marathon Sports! Who doesn’t love rooting for the underdog? This marathon is all about cheering for the hometown team or hero, hoping they’ll overcome the odds and emerge victorious.

Begin with my personal favorite sports movie, Miracle. We’ve seen so many movies about the same sports over and over, but how many serious hockey movies have we ever seen? Pretty much just this one. After Miracle, get your Kleenex ready and pop in Warrior, one of the most emotionally jarring movies I have ever seen. Then prepare to get your feel-good on with one of the best sports movies of all time with Remember the Titans. Don’t forget to quote every single line of it throughout the whole movie. Finally, wrap up with your choice of boxing flick, with either Rocky or Raging Bull.

Alternate movie: So maybe you’re not Canadian like me, and don’t really care about a hockey movie. Or perhaps you’ve had enough of American football movies altogether. In that case, check out Goal!, a lesser-known soccer movie from 2006. It’s a great film with great characters and an awesome story.

Marathon Length:
Just over or under 8 hours, depending on your choices

The Lost in Space Marathon There are so many movies that you could watch during this marathon, if is difficult to narrow it down to just a few. I’ve chosen just four movies, each of which are unique in their storyline and their tone, which should provide optimal enjoyment throughout your marathoning.

Let’s begin light and funny with The Hitchhiker’s Guide to the Galaxy. While this movie wasn’t good enough to warrant the adaptation of any sequels, it’s weird and quirky, and should start your evening out right. Next, move on to either Gravity or Interstellar, the two newest movies of the marathon. The comparisons between these two films are unavoidable, but my preference sits heavily in favor of Interstellar. Finally, wrap up with one of the greatest and most influential films of all time, Star Wars Episode V: The Empire Strikes Back. Don’t worry about not watching any other Star Wars films during the marathon. Come on, it’s not like you don’t know the story by heart. You can watch all those other movies another time.

Which movie marathon would you do first? What ideas do you have for interesting marathons? Make sure to let us know in the comments.