Get Spooky with this Hauntingly Fantastic Elvira Cosplay 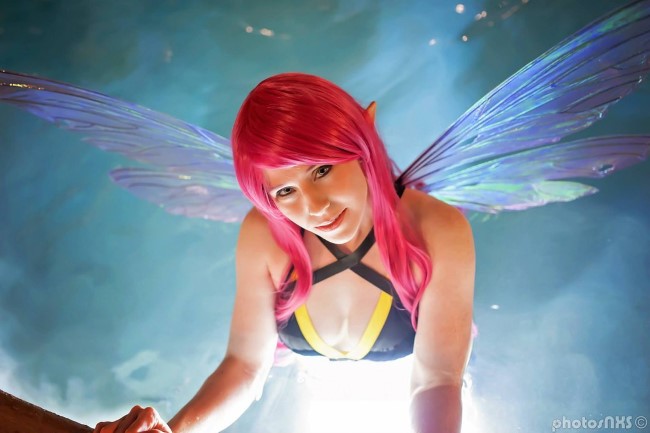 Megan Gwynn, better known as Pixie from X-Men, is a colorful and vibrant mutant. Originally starting as a side character in the comics, she has risen to popularity and was featured in the movie, X-men: First Class. Pixie has iridescent rainbow colored wings which she loves to fly with, pink hair and the ability to use her pixie dust to cause others to have hallucinations. Not only is she colorful in appearance, but also in personality. Often happy and optimistic, she easily gets along with fellow mutants and always tries her hardest during training. Pink Justice Cosplay has her own take on Pixie, showcasing her cheerful attitude. Instead of going with the full black and yellow bodysuit Pixie often adorns, she opts for a fun summer take, creating a bathing suit of black and yellow. Perched by the pool, her beautifully crafted wings glisten in the sunlight, showcasing the multi-colored shimmer that Pink Justice Cosplay has achieved. This Pixie look may not be a traditional representation, but it is more certainly what Pixie would wear to the beach on a hot summer’s day. Blackbeard Cosplay is the Queen of the Seven Seas