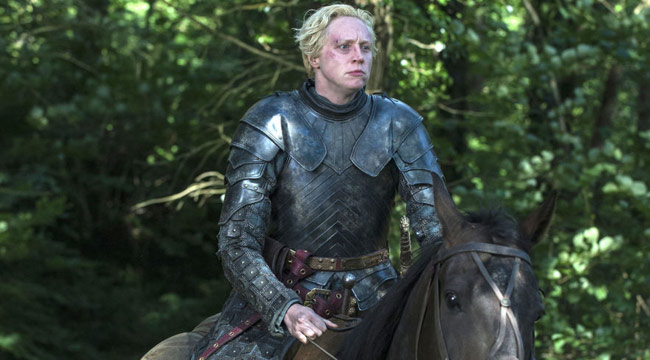 WHEN YOU SPOIL THE GAME OF THRONES YOU DIE!

Brienne of Tarth may have been denied her most exciting late series storyline from the books since Lady Stoneheart seems to be scrapped, but that doesn’t mean the show hasn’t given her plenty of different adventures.

With Brienne and Podrick’s arc for Game of Thrones Season 5 well underway, and being the most dramatically different in “The House of Black and White” from the books, the heroic duo will be the focus of this week’s Game of Thrones Books Vs. Show comparison.

In the books, Brienne and Podrick don’t even set out from King’s Landing to find Catelyn’s daughters together. They bump into each other by accident on the road, Podrick having taken it upon himself to flee King’s Landing after Tyrion was accused of poisoning Joffrey.

Keeping them together was not only a brilliantly endearing character duo, but a smart storytelling choice. Though Brienne isn’t successful in taking either Arya or Sansa under her protection, she would have passed them both by if it hadn’t been for Podrick, who recognized both the Hound and Sansa and Littlefinger. One can only hope Podrick will continue to be unexpectedly helpful. I’d hate to see him killed off now that his storytelling function has been served.

It’s strange thinking about how Brienne’s arc has played out in the books compared to the show; Season 4 made the encounter between Brienne, Podrick, Arya and the Hound such a climactic moment that was entirely absent from the books.

Brienne never gets close to the Blood Gate, never encounters Arya, and certainly never meets Sansa. Arya blows Westeros for Braavos much earlier in the books than the show and Sansa stays in the Vale of Arryn through the whole of Feast for Crows.

We still don’t know exactly where Sansa and Littlefinger are bound for, though Littlefinger’s news turns out to be the acceptance of a new marriage proposal. I don’t know if I’m confident that Brienne’s honor and swordswomanship can outpace Littlefinger’s financial and political scheming. Even if Brienne could get her hands on Sansa, Sansa may still not see the benefit of going with a lone warrior who’s got all sorts of suspicious accusations to her name. Could Littlefinger and Brienne compromise? It doesn’t seem that would be in either of their characters.

Of all the fantasy subplots from the books, there’s probably no other that fans want to see in the show so desperately. I count myself among the fans that expected Season 4 to close with Lady Stoneheart’s introduction. I even suspected that it might be the closing moment of the season 5 premiere, which would be a huge, White-walker-like hook for the new season, but not so lucky.

Who exactly is Lady Stoneheart? Remember the Brotherhood without Banners and their priest for the Lord of Light Thoros of Myr? Remember how he was able to bring Beric Dondarrion back to life after the Hound nearly cleaved him in two? Well, after the Red Wedding, the Brotherhood are scavenging along the Red Fork and come across Catelyn Stark’s body.

In the books, Beric Dondarrion sacrifices himself to bring Catelyn back to life, but the restoration isn’t as complete as the times Beric came back. Catelyn’s throat being cut to the bone means she has to manually put her fingers in her jaw to speak and the shock of the Red Wedding has left her consumed with omnicidal vengeance. She and the Brotherhood eventually encounter Brienne and Podrick again. Brienne’s point of view is the only way that the reader even sees Lady Stoneheart besides her introduction.

Stoneheart, unsympathetic to Brienne’s perceived betrayal and her story of seeking Arya and Sansa on Jaime Lannisters orders, gives Brienne a choice. Kill Jaime, or be hanged. Brienne refuses. She and Podrick are almost hanged, but Brienne seems to shout “sword” at the last second, which convinces Stoneheart to let Brienne go free, apparently under the impression she will go kill Jaime after all.

And that’s all we’ve seen of Lady Stoneheart in the books. The big question is, will the demented resurrected Catylen Stark have a big enough role in the books to come that HBO couldn’t completely scrap her for the show? Obviously for now, the answer is no. Doesn’t mean it still wouldn’t be really freaking cool.

There’s been a few fans speculating that Sansa may take on some of the thematic trappings of the Lady Stoneheart arc, given the shrewder, darker direction the show has taken Sansa’s character. If, say, Sansa was the one to order Brienne to kill Jaime to prove her loyalty, that would be pretty chilling!

There’s one scene in Dance with Dragons where Brienne catches up with Jaime again in the Riverlands. This of course depends on Jaime not being in Dorne for the foreseeable future so it seems like this subplot is being tabled for now. Though that subplot still has lose ends that the show has mentioned itself.

In Feast for Crows, instead of going to Dorne to rescue Myrcella, Jaime leads a campaign to subdue the last remaining holdouts of House Tully. They consist entirely of Brynden the Blackfish’s company holding Riverrun, who stubbornly refuses to bend the knee even with generous merciful offers from Jaime.

Brynden was a significant supporting character in Season 3 and was specifically mentioned as having escaped by Roose Bolton in the aftermath of the Red Wedding. We’ll see if he shows up again.

Brienne was a central PoV character in the books for Feast of Crows, interconnecting major storylines. It seems the show will have her interconnect a different set of equally important storylines. I’d like to see Littlefinger NOT get something he wants at last in this series; I can think of few remaining characters I’d like to see knock him down a peg more than Brienne.