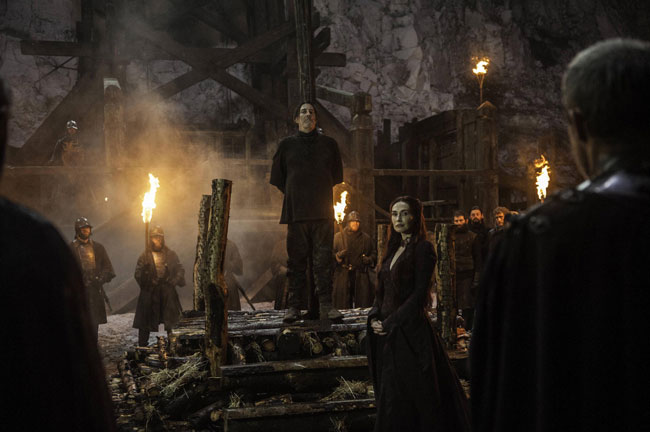 ‘Game of Thrones’ Books Vs. Show: The Fate of Mance Rayder

WHEN YOU SPOIL THE GAME OF THRONES, YOU DIE!

In the season 4 Finale of Game of Thrones, Jon Snow advised Stannis Baratheon to take Mance Rayder prisoner and to listen to what he had to say. Did Stannis ever even bother to talk to the man he was so determined to have bend the knee? Was there really no way Stannis could have accepted keeping Mance alive as the leader of his own people? And, of course, Melisandre had to step in and paint the whole thing as a holy victory for truth and light over lies and darkness.

Since actor Ciarán Hinds recently did an interview about his character’s death, we know for sure that Mance Rayder has been killed off for real. It bears repeating here, SPOILER WARNING SPOILER WARNING!

The future of Game of Thrones, especially at the Wall and beyond, is now even more of a mystery since in the books, Mance Rayder is still alive.

In the books, though he did indeed apparently burn to death and was spared more pain by archers under Jon Snow’s command, it was in fact not Mance Rayder on that pyre. It was a Wildling called Rattleshirt, glamoured to look like Mance Rayder by Melisandre.

But, with Mance dead, there are a few storylines that show has apparently closed off for itself, or perhaps will have to arrange in some other manner. With that in mind, here’s a list of a few plot lines (All from the books) Game of Thrones will have to rearrange or perhaps scrap.

The specific reason that Melisandre pulled a bait and switch with Mance is to send him on a rescue mission to Winterfell. Melisandre’s visions relatedly show her Jon Snow and his sister Arya, so she believes that she must get in John Snow’s good graces. When word arrives that Arya is being wed to Ramsey Bolton, Melisandre convinces Jon to let Mance lead an anonymous undercover rescue party to Winterfell and take her back.

This of course depends on “Arya” being present at Winterfell, which we’ve had no indication of yet. It could still be coming in the show, especially since we’ve not yet seen the Boltons in Season 5. The Showrunners have handled different long term payoff plotlines differently.

You may be thinking, Arya marry Ramsay? Ewww! And she’s sailing away for Braavos right? You would be right! Truth is, it’s not actually Arya. The Boltons are looking for any way possible to legitimize their claim to Wardens of the North, including marrying a daughter of the former Wardens, the Starks and even going so far as to pass a commoner off as Arya. Who is this poor soul that gets to be married to Ramsay Flayer-Extraordinaire Bolton? A serving girl at Winterfell who was friends with Sansa named Jeyne Poole.

Ride into Westeros With ‘Game of Thrones’ 2D Animated Video

This is storyline at least referenced once in each of the books. The Lannisters actually pass Jeyne off as Arya to the realm, though the Boltons know the truth. Again, anything to rightfully claim the North. Jeyne has appeared in a split second shot in the show in the very first episode but as an uncredited extra and has not reappeared since.  And that leads us too…

“Reek” Remembers his old Self

Reek, finding himself back at the castle where he grew up as Theon Greyjoy and recognizing the “Arya” as Jeyne Poole begins to think of his old self again. I expect Ramsay’s phony marriage to “Arya” will be realized in the show because the humiliation that Ramsay puts Jeyne and Theon through is a big wake up moment for Theon. He starts rebelling against his conditioning and in small but opportune ways, helps Mance’s free folk, the Ironborn and Stannis’s host unseat the Boltons. We’ll see how much that pans out in this season.

Finally and perhaps most directly, the books include storylines with Mance’s spearwife and infant son, who is actually born while Stannis’s cavalry overtakes the Wildlings just North of the Wall. Melisandre has some designs for the son of the King Beyond the Wall, but Jon Snow switches Mance’s son with Gilly’s son, and Mance and Melisandre are none the wiser. Jon fears that Melisandre will use the infant’s blood for her magic. Gilly knows and is obviously crushed. It’s really kind of horrid. So much mistaken identity in this location in the stretch of the books.

This looks like something that’s going to stay in the books, especially since the effects of the lives, deaths and switching of the Mance’s direct family haven’t really panned out at all in the books yet.

As for the show itself, The Wildlings are still going to be pissed that Stannis burned Mance alive, even though Stannis is still going to want their fealty I imagine. The show better give Jon something to work with if he’s going to keep the peace.
&nbsp