‘Game of Thrones’ Retrospective: Daenerys and Her Dragons 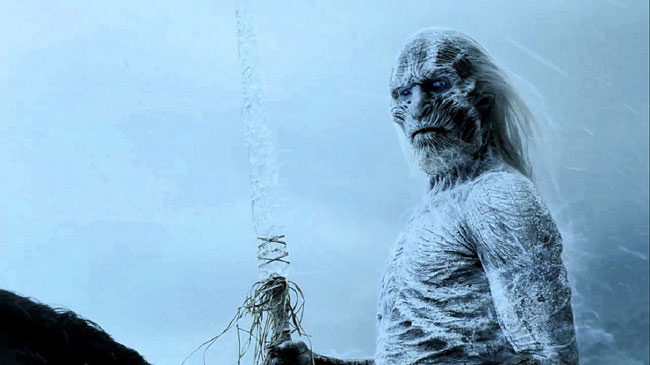 Game of Thrones History: Beyond the Wall

We saw generations of politics and turf war come to a turning point and an ancient menace show it’s face in last Sunday’s Game of Thrones. Jon Snow and Tormund Giantsbane took a serious step towards making peace between the Night’s Watch and the Free Folk only to have hundreds butchered and turned to wights by the White Walkers.

But where did the White Walkers come from? How did the monolithic Wall come to segregate the North of Westeros in such an enduring way? The show has given working answers to these questions, enough for us to follow the story, but like many rich worlds that originate from books, there is plenty more for those who wish to delve deeper. The show and the books are pretty much even in terms of portions of the complete story told. So exploring the history of the realms Beyond the Wall may be our only hope of (figuring out how the show will) triumph over the White Walkers.

Get out your candles and blow the dust from your scrolls, Thrones Fans. History School is in session! Also for the sake of consistency, we’ll be referring to the White Walkers as the White Walkers even when discussing information that originates primarily form the books and other non-show sources. Approximately 10,000 years before the current events and immediate history of the show, the invasive and pillaging First Men made a Pact of peace with the native, diminutive and nature-worshiping Children of the Forest. They agreed to geographically demarcate Westeros so that the Children could continue inhabiting the Weirwood forests and the First Men could build their holdfasts and farm the more clear lands.

During this time, the Wall had not yet been built (yes, built, we’ll get to that), so the area considered the North of Westeros was even more expansive and socio-politically uniform.

The Pact between the Children and the First Men marked the end of the Dawn Age and the Beginning of the Age of Heroes. So named for the many legendary figures that lived during this time including the supposed founders and or ancestors of Houses Stark, Lannister, Baratheon, Greyjoy and Bolton.

Then, 2,000 years after the Pact, an unprecedented winter began, bringing a darkness that stretched over the entire known world. The winter and darkness lasted a generation and came to be known as the Long Night. It was during this time that the White Walkers first appeared, coming from the Northern Polar reaches of Westeros called the Lands of Always Winter. We’ve presumably gotten a glimpse of the Lands of Always Winter during that scene where a White Walker carried Craster’s last son to that altar of ice.

In the books she also tells tales of a last hero, a man who resolved to make contact with the children and find some way to beat the White Walkers. The host of companions he took on his journey froze to death one by one. But legends say he did find the Children and formed an alliance with them. The advance of the Walkers wasn’t checked until it was apparently discovered that Dragonglass (obsidian) weapons could kill a Walker. The Night’s Watch and the Wall

The dark cold tide of the Long Night was turned by the Children and the First Men. With obsidian weapons, the White Walkers were ultimately defeated and driven back to the Lands of Always Winter in a battle known as the Battle of the Dawn. The last hero supposedly wielded a sword of Dragonsteel during this battle, according to research by Samwell Tarly in the books, and Jon wonders if that refers to Valyrian steel. Events in “Hardhome” seem to give credence to that assumption.

The Men who fought the Battle of the Dawn supposedly established the Night’s Watch. Brandon the Builder, a prolific and unmatched architect during the Age of the Heroes and the founder of House Stark, built the Wall for the Night’s Watch, with ice and magic. The in-universe consensus seems to be that the Wall took hundreds of years to erect and was initially hundreds of feet shorter than it appears in the show.

George R. R. Martin has said the following concerning Bran the Builder, “No one can even say for certain if Brandon the Builder ever lived. He is as remote from the time of the novels as Noah and Gilgamesh are from our own time.” Game of Thrones is still fantasy and there is a towering Wall of ice and a Noble House baring Brandon Stark’s surname.

At any rate, the Wall and the Night’s Watch were dedicated to keeping the White Walkers from ever threatening the people of Westeros again. As such, service in the Night’s Watch was considered an honor. Back then the Long Night was fresh in every one’s mind so keeping the White Walkers at bay by building up and guarding the Wall was an attractive calling. The Children even gifted 100 obsidian weapons to the Watch every year.

But then the White Walkers didn’t come again, ever. Countless winters passed without so much as a sighting of the mythical foes. And eventually, with a 700 foot wall of ice completely separating Westeros, the Night’s Watch refocused on guarding the realm against raids by people who happened to live north of the Wall.

Whatever political or economic factors went into the Wall being built where it is or why certain groups decided to remain north of it have been lost to the ages. Though we’ve seen the results of the White Walkers’ absence. The Free Folk and the Northerners were once one people with one culture, now they’ve been enemies for generations. Tyrion has said that he expects the only difference between the 7 Kingdoms and the Wildlings is that his ancestors happened to be born on the right side of the Wall, the southern side.

Pretty much every one on both sides of the Wall now assume that the Wall was built to keep the Free Folk out. Tyrion, again, has said the he thinks the Night’s Watch guarding the realm against “grumpkins and snarks” is pretty much crap, and he’s one of the most well-read characters in the show. Not to mention that service in the Night’s Watch has shrunk and fallen to the status of punitive exile for most people.

Thus you could understand the skepticism that initial news of the White Walkers return was met with in season 1. As the Children of the Forest continued to die out, so presumably did their gifts of obsidian weapons dwindle. Even if somehow the Night’s Watch and the Free Folk gathered enough Dragonglass to kill all the Whtie Walkers, they would still have to cut through the effectively infinite hordes of whites to get to them. So far in the books, the Night’s King is nothing more than a myth. The legends say that the Night’s King was originally a fierce warrior and the 13th Lord Commander of the Night’s Watch. This was still during the Age of Heroes. Then he fell in love with a woman “with skin as white as the moon and eyes like blue stars” and “her skin was cold as ice”.

Most fans assume that this woman was a White Walker, even though we’ve had no other mention of “female” White Walkers in the books or show. This kind of alludes to the still ambiguous question of how the White Walkers reproduce, other than making more of their kind out of the living.

The legend says that the Lord Commander pursued the woman or was lured by the woman into laying with her, and thereby gave her his soul. The Commander brought her back to one of the fortifications along the Wall, the Nightfort, and declared themselves King and Queen of the Night’s Watch. During the 13 years he presided over the Nightfort, many atrocities were committed including making sacrifices to the White Walkers.

It took an alliance between the then King in the North and King Beyond the Wall to depose the Night’s King and free the Night’s Watch. It’s unclear if he was killed or if he was driven away like the Walkers were during the Battle for the Dawn. Afterwards all records of him were erased and his very name was forbidden from utterance.

Who this Lord Commander was before he joined the Night’s Watch has been forgotten. Although some fans speculate that since the Starks have always been the Lords of the North and since the records were erased, the Night’s King may have been a Stark and the Starks wanted to cover up an embarrassment.

But I think it’s safe to assume the former. Incorporating the legend from the book, even if it hasn’t been referenced yet in the show, would make the character that much richer. That would mean that this White Walker has lived for nearly 8,000 years. From a narrative standpoint it does add weight and drama to the central conflict north of the Wall to have a face of the White Walkers, a leading Big Bad.

Will the Night’s Watch and the Free Folk have the foresight and courage to put aside their differences and stand together against this enemy? Will they find the means to do so? Their chances seem bleak without more Dragonglass or Valyrian steel. If only there was something powerfully magical with fire that could deal with the White Walkers and the wights.

Here’s an idea, Daenerys. You want to rule Westeros? Save it from the White Walkers with your dragons!