Game of Thrones VFX Reel Shows the Making of “Hardhome” 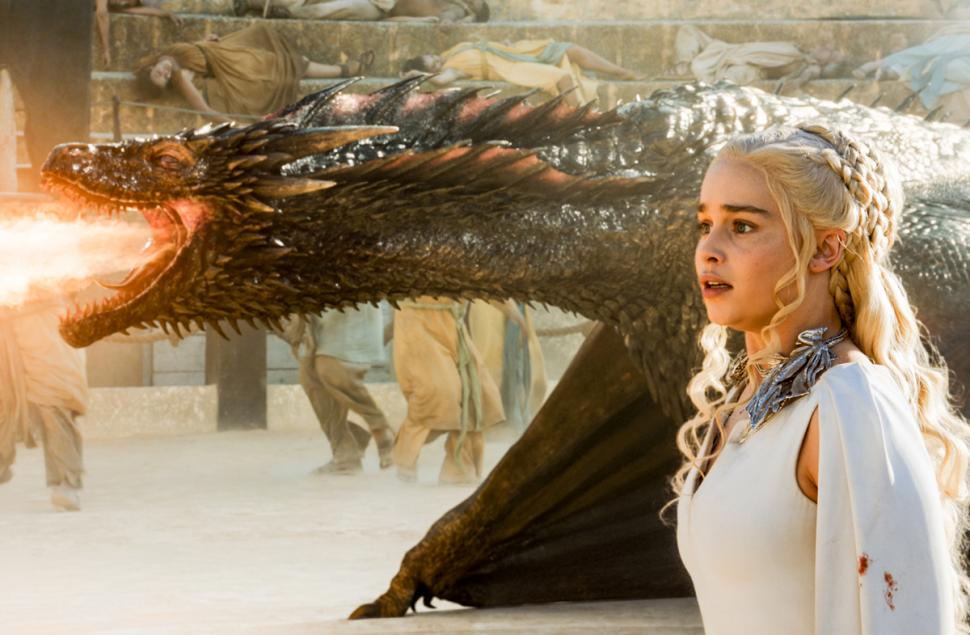 ‘Game of Thrones’ Retrospective: Daenerys and Her Dragons

Queen Daenerys got her crowning moment of awesome for Season 5 in last Sunday’s Game of Thrones. Beset on all sides by the insurgent Sons of the Harpy, it seemed like there would be no escape for Daenerys. But the fearsome Drogon flew in and escaped with Daenerys on his back, crisping and clawing plenty of Harpies in the process.

It’s been a long journey for Daenerys and her dragons. We’ve seen them be born and reborn and grow in tremendous ways. Daenerys has brought back creatures to the world that were previously thought extinct and brought House Targaryen back from obscurity.

The Ancient Valyrians learned to tame dragons after they discovered them in Essos. Their descendants, House Targaryen, managed to escape the Doom with a handful of faithful dragons. Balerion the Black Dread, Vhegar and Meraxes where instrumental in the conquest and unification of Westeros into the Seven Kingdoms, ruled by Targaryen Kings thereafter for nearly 300 years.

The Targaryens continued to breed, ride and war with dragons for approximately 150 years into their formal rule. The Targaryen civil war called the Dance of Dragons nearly wiped out all the dragons that existed in Westeros and in the short years following, the Targaryens couldn’t successfully breed them anymore. Incidentally, it is said that after the dragons died out, Summers in Westeros became shorter and Winters became longer and harsher, on average.

By the time the show begins, only rare eggs and the preserved hidden sculls of the Targaryen’s dragons remain. Which brings us to Daenerys.

The Mother of Dragons

House Targaryen’s numbers and station had fallen drastically by the events of Game of Thrones Season 1. Viserys certainly didn’t hide his indignation at being in the protective custody of Magister Illyrio and having to bargain with “savages” like the Dothraki.

Though she was certainly nervous going into her marriage to Khal Drogo, Daenerys did receive an exotic gift of three petrified dragon eggs for her wedding. Through the harsh life among the Dothraki and her abusive relationship with Viserys, the eggs served as an alluring reminder of her House’s history. She was especially intrigued when she was able to hold the eggs in a campfire without burning herself.

After Khal Drogo’s cruel death, his khalasar abandoned Daenerys, their khaleesi, all but for a few warriors and families. With practically nothing left to her in the world and no family, Daenerys builds a pyre for Drogo. She binds the sorceress Mirri Maz Duur to the pyre and sets the dragon eggs beside Drogo, before stepping into the roaring flames.

By morning when the fire had gone out, Jorah Mormont expected to find nothing but ash and bones. Instead, we see the unburnt Daenerys, naked as her name day, with three baby dragons perched on her arms and shoulders. Those present bore witness to the first birth of new dragons in 150 years. We will never forget it either.

As inspirational and mesmerizing as hearing the first cries of dragons in the world for hundreds of years, it doesn’t help being stranded in the Red Waste. Qarth is the first stint of civilization she comes to after her dragons are born and already word has spread of them. The intrigue surrounding her heritage and her dragons is the primary reason why the Spic King denied her and Xaro Xhoan Daxos accepted her into the city.

Once in the city and not immediately concerned with survival, Daenerys takes some time to raise her dragons, teaching them the ancient Valyrian command “dracarys”, compelling them to breathe fire.

At this point, the baby dragons are not particularly dangerous but still valuable beyond measure and powerfully magical. The Warlocks of the House of the Undying use their trickery to abduct the dragons and the dragons to lure Daenerys to their mysterious abode.

After several personally affecting visions, Daenerys does manage to find her dragons. Their modest dragonfire is still enough to incinerate Pyat Pree and free Daenerys from the House of the Undying.

The Experiences in Qarth taught Daenerys that there shall always be those who seek the power and political sway that her name and her dragons carry.

“A Dragon is not a Slave”

With her dragons grown enough to hunt and feed themselves, Daenerys goes about getting an army to march on Westeros with. Seeing how callous, petty and greedy Master Kraznys of Astapor is gives Daenerys the idea to bargain one of her dragons for an army of legendary Unsullied. Indeed Kraznys seems so entertained by the notion that he bargains with Daenerys directly when she brings them up, after days of negotiating through Missandei.

Daenerys and Kraznys carry out their exchange in the main yard of the city. Kraznys is barely paying Daenerys any attention as he takes hold of Drogon’s leash.

When he complains that her beast won’t come, she intones, “A dragon is not a slave,” in Valyrian. With another command of “Dracarys”, Drogon torches Kraznys while Viserion and Rhaegal end the suffering of those crucified on the Walk of Punishment. All three dragons are airborne overhead as Daenerys marches from the smoldering Astapor with her new army.

Throughout season 3 Daenerys learned to use her dragons to tremendous affect and to display them as symbols of power to her allies and enemies. And she began fully realizing her mission of liberating those in slavery.

As Daenerys set her sights on Meereen, her dragons continued to grow in size and power. So much so that they were even growing beyond Daenerys’s control. They don’t play any major part in her taking Meereen.

We see Drogon slaughter a flock of sheep for breakfast and Daenerys being generous enough to repay the goat-herder for his lost livelihood. But nothing can replace a murdered child. Daenerys is horrified to think of her dragons killing innocent children. Daenerys has never had to punish her dragons before but she feels she cannot take any chance of more people being hurt, nor of her dragons becoming demonized.

Staying to rule in Meereen forced Daenerys to make many tough decisions and compromises. Probably the most affecting for her, the Mother of Dragons was losing Drogon and binding Viserion and Rhaegal in chains.

Viserion and Rhaegal grew quite a lot even while chained in the catacombs of Meereen. Even with her dragon’s growing too big for Daenerys to know what to do with them other than imprison them, her problems in Meereen are extensive.

The Sons of the Harpy, beholden to the slaving order of Meereen, wage a guerilla war against the foreign Dragon Queen. They even wound the Captain of her Unsullied, Gray Worm and kill Ser Barristan Selmy. After that outrage, Daenerys rounds up the heads of the great Meereenese families and parades them in front of the ravenous Viserion and Rhaegal. One of them is ripped in two and burn and eaten.

It’s an intimidating gesture, but it’s not having control of all her dragons back.

Daenerys makes some wise political maneuvers but the Sons of the Harpy are determined to trap and kill Daenerys during the Great Games at Daznak’s Pit. They may have succeeded if it hadn’t been for Drogon’s instinctively timed reappearance. Drogon puts the full force of his considerable fire and maw forward, forcing the Harpies to scatter and take pot shots with thrown spears.

Daenerys forgets all else and all her visceral fear of the dragons in and of themselves, relying on her motherly bond with them. She tentatively mounts Drogon’s back, as her ancestors did with their dragons in centuries past, then commands him to fly away from the carnage.

Where they go from here

Daenerys has an important choice to make, at least in my mind. She can either try to return and reclaim Meereen, or she can quickly gather up whatever allies, forces and her other dragons that she can and finally try to return to Westeros. Hard to say which choice will be wiser, or more easily done. Slavers bay is teeming with her enemies. Now may be the best time to pack up and cross the Narrow Sea, otherwise, Daenerys risks losing more invaluable allies and more far too precious Unsullied.

As for the dragons, they seem to be growing in size and power exponentially. Though, if Drogon could still be wounded and stalled by a mob of spearmen, he’s certainly not yet powerful enough to crush a fully trained and equipped army.

Just how powerful could Drogon, Viserion and Rhaegal become? Well, Balerion was fully grown when Aegon the conqueror rode him in the War of Conquest. It is said of Balerion that his wingspan threw shadows over entire towns and that his jaw was wide enough to swallow a mammoth whole. Throughout the centuries of Targaryen warfare, Balerion lived to die of old age after 200 years, unlike dozens of his kind.

Will we see any of Daenerys’s dragons grow to that kind of size? Who can say? But it is amazing to think about. I do think something decisive will happen in the season 5 finale that will make Daenerys’s path forward clear.