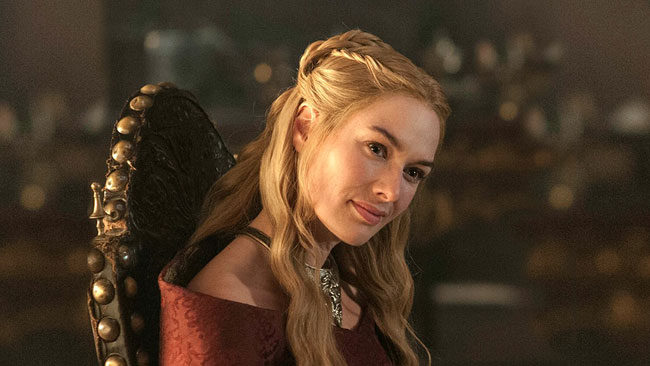 WHEN YOU SPOIL THE GAME OF THRONES YOU DIE!

Cersei got the script flipped on her in last Sunday’s Game of Thrones.

After besting and imprisoning Ned Stark in season 1, and slanting Tyrion’s trial in season 4, Cersei finally got outplayed by a rather unlikely figure in King’s Landing. It was hard to tell just how politically savvy the High Sparrow was when we met him. He clearly had perspective and wisdom that came from his earnest life of service and altruism but who would have guessed that he had the mind to play Cersei?

The High Sparrow had to have at least heard of the many rumors and wrongdoings swirling about Cersei and the Lannisters. Commoners in the streets have taunted Joffrey and Tommen both for being twincest bastards and the High Sparrow is a man of the Gods and the People.

Although, we don’t know specifically what the High Sparrow has jailed Cersei for. With Lancel as the apparent key witness, we know the charges are going to include murder of King Robert and adultery.

How does this compare with the books? In the books Cersei makes many more ill-advised, ego-maniacal decisions as Regent before the Faith turns the tables on her. She flat out refuses to pay the Crown’s debt to the Iron Bank and the Faith, she wastes money the crown doesn’t have on a new royal fleet and makes peon of questionable skill and experience the Master of Ships.

Cersei also instigates the book’s enmity between the Martells and the Lannisters by plotting to murder Trystane Martell first, before any threat from Dorne is made. She’s even more paranoid about dismissing advisors and collecting minions and she’s extra vicious in punishing her enemies by sacrificing them to Qyburn’s experiments.

Also in the books, Cersei’s and Margaery’s imprisonment are more connected to each other instead of the former being more a response to the latter. Could indicate interesting change-ups as I’ll detail below!

Cersei’s Plot Against the Tyrells

In the show, we saw Cersei anoint the High Sparrow and set the Tyrells squarely in his sights. Loras was obviously the easier target but Margaery is the one Cersei considers a bigger, more personal threat to herself and Tommen. Cersei managed to catch both Loras and Margaery in a lie.

Cersei’s scheme against Margaery is little bit more complicated in the books. All those times Cersei calls Margaery a whore in the show? In the books she actually tries to prove it. When Cersei uncovers no direct evidence that Margaery committed adultery during either of her marriages to Renly or Tommen, she seduces Osney Kettleblack (yes, really, Kettleblack) into trying to seduce Margaery so she can have proof.

It doesn’t go as planned. Margaery rebuffs Kettleblack with teases, but Cersei makes her public accusations all the same. She assembles a long line of supposed adulterers from knights to lords to sellswords to bards.

Then, the High Sparrow interrogates and tortures Kettleblack until he confesses the real truth, that he falsely confessed to adultery with Margaery under Cersei’s direction and that he murdered a previous High Septon under her orders. The charges also eventually include sleeping with Kettleblack herself and murdering King Robert Baratheon.

Not surprisingly, the show has simplified this dangerous game of he said/she said for Cersei and the Tyrells.

The interesting difference here is that in the books, the charges actually brought against Margaery are completely manufactured by Cersei whereas in the show, Cersei has Polyvar out Loras and Margaery. In the books, Littlefinger and Olenna don’t have anything to do with the High Sparrow turning on Cersei. Littlefinger is still currying favor and allies in the Vale and Olenna stays in High Garden after Tommen’s wedding.

The purpose is most likely to keep the action surrounding familiar and established characters instead of having to introduce too many new ones. It also made room to make the most necessary new character, the High Sparrow, much more interesting.

The differing nature of the charges and schemes between Cersei and Margaery and the presence of Littlefinger and Olenna throw some wild cards into the shows future.

We still don’t know how exactly Littlefinger and Olenna may have facilitated the High Sparrow’s arrest of Cersei. Lancel joined the Faith Militant back in the beginning of the season and seemed like he could have dished on Cersei even then. But Littlefinger talked about Lancel like he was someone Olenna could use against Cersei.

Olenna might get her revenge on Cersei but that won’t get Margaery and Loras released, especially since the charges against her are unrelated to Cersei in the show. Because the charges against her in the books turn out to be manufactured, the Faith releases Margaery form prison into the custody of Randyl Tarly until her trail by the Faith. With the High Sparrow seeing Margaery’s perjury first hand, he’s going to be much less inclined to release her so it’s hard to tell how Margaery’s story will go in the show.

Cersei meanwhile stays pretty stubborn, until her complete isolation from her allies motivates her to confess to enough of her crimes to get some maneuverability back. She elects a trial by combat and sends an emotional summons to Jaime to champion her. In the books, Jaime has become so disillusioned with Cersei that he burns her summons and does not come to her aid.

This is going to be interesting to see what the show will do. Will Cersei recall her brother lover to champion her? Cersei has been similarly dismissive of Jaime in the show as in the books after Tywin died, but we saw Jaime say in Dorne that he would still want to die in Cersei’s arms.

The other important difference is that the show has Jaime in Dorne on a more personally important mission for his family instead of a campaign of putting down the rebellious Riverlands that amounts to a formality, as per the books. So not only does the show have Jaime more sympathetic to Cersei than in the books at this juncture, he also has a more compelling reason to stay where he is. Knowing that Jaime is trying to rescue Myrcella, might Cersei not even summon Jaime?

Will Jaime have to choose between helping his sister and staying with his daughter? My first thought it that Jaime will be pained by the choice but that he will decide to stay with Myrcella. My thinking there is that since Jaime abandons Cersei in the books, Cersei has to find a different champion.

Perhaps someone who’s championed Cersei in a trial by combat before? Haven’t had an update on Qyburn’s work in a while have we?

In the books, Qyburn introduced Cersei to one Ser Robert Strong, newest member of the Kingsguard and her perspective champion. According to various accounts at court, Ser Robert never removes his great helm, never speaks, never eats and never uses the privy. It’s pretty much assumed by Kevan Lannister, Mace Tyrell and Grand Maester Pycelle that Ser Robert is in fact the reanimated Gregor Clegane. The One who Cersei instructed Qyburn to save from a gruesome Manticore venom death by whatever perverse expertise he could deploy.

The show has been reminding us of this subplot regularly enough that it should come to fruition. So Jaime will stay in Dorne and “Ser Robert Strong” will arise, I expect.

Neither Cersei’s nor Margaery’s trials have taken place in the books yet, so we don’t really know who to expect to act as the Faith’s champion and fight against Ser Robert.

The Devastated Court of Baratheon and Lannister

With Cersei and Margaery in prison and awaiting trial, Tommen is even more helpless. Kevan Lannister is summoned to serve as Regent and he goes about trying to repair some of the political and financial damage left in Cersei’s paranoid wake.

Kevan wisely makes some concessions to the Tyrells in filling seats on the small council including making Mace Tyrell the Hand of the King. At least in the books.

The show is making things out to be even bleaker for Tommen’s small council now that Cersei is imprisoned.

Kevan will probably be back as Regent, but Mace Tyrell has been dispatched to Braavos to negotiate new arrangements with the Iron Bank. This really only leaves Pycelle and Qyburn left of the previous small council for Kevan to work with and we know Kevan doesn’t trust Qyburn.

But there are two other powerful players around in King’s Landing that weren’t present in the books. Littlefinger and Lady Olenna.

Even though Olenna’s never quite been one for direct positions of power, she may still take the opportunity to secure the Tyrell’s hold on the Iron Throne while Cersei takes a time out.

In the books, Kevan Lannister even wishes that Littlefigner was still around to serve as Master of Coin and alleviate the crown’s debt. Abra Kadabra chump! He’s around! How could Littlefinger refuse a seat on the impressionable Tommen’s small council now, when all the rival and worrisome players at court are gone? No Tywin, no Cersei, no Varys, no Tyrion. Now that he’s also the Lord of the Vale, he has more legitimate power than ever. Was this part of show-Littlefinger’s Master Plan all along?

Seven Hells, things seem to go back to that schmuck a lot.