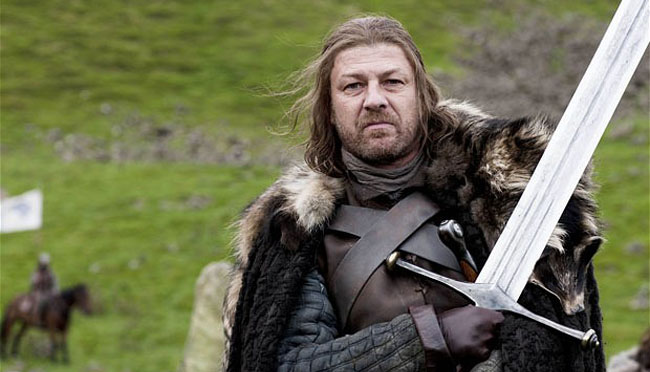 Game of Thrones is a show that, quite literally, lives and dies by its characters. From the Starks to the Lannisters, the Baratheons to the Targaryens, and all outside these noble houses, these characters drive the conflict, shape the setting and keep us watching. Everyone has their favorites and their favorite moments with each characters. But some have made more memorable introductions than others.

Character introductions are such crucial moments. They set up our expectations and give us a working understanding of the character as they fit into the narrative and the setting. The following moments may not have been the very first moments we spotted these characters but they were the most important earliest moments.

And again, because I could never say which is better or worse for all of the ones here, they’re reviewed in chronological rather than qualitative order.

Eddard Stark, Warden of the North Going on the fifth season now, it’s almost hard to remember when good ol’ Ned Stark was the central protagonist of the show. We see him plenty before this moment, in which he’s called upon to execute a Night’s Watch deserter, rambling about White Walkers. But here we see him truly as a man of duty and as a father.

His decision to dodge Brandon’s question about the truth of the deserter’s claims of White Walkers turns out to be very typical of his parenting. He delays discussing Jon’s true parentage (until it’s too late), and tries to keep Arya and Sansa in the dark as much as possible. Not an unwise preference given the deadly secrets he stumbles into at King’s Landing. But I always had the impression, especially as the season wore on, that Ned’s avoidance came partly from his own uncertainty about what to do in these politically charged situations. Watch the scene here. Tyrion is not to be found with the rest of Robert Baratheon’s retinue when the royal family visits Winterfell. We first see him doing what he’s known for, drinking and lust. Tyrion’s sharp tongue and his teasing relationship with his older brother Jaime are touched upon here as well as his disdain for his Imp moniker.

Of course, I could not in good conscience omit this scene from first impressions of Tyrion. Just watch and grin as we see Joffrey’s feeble jabs and petulant chauvinism crumble before Tyrion’s armor piercing orders and slaps!

And a highlight reel for good measure!

Syrio Forel, First Sword to the Sea Lord of Braavos I’ve always wondered exactly how Ned Stark came to procure Syrio Forel’s instruction for Arya. Since Ned has been fighting in Westeros his whole life, it’s unclear to me how, or perhaps more accurately why he thought to hire the unconventional foreign Syrio to tutor his daughter in swordplay.

But whatever.  We can all agree it was an inspired choice. Syrio was able to instruct Arya in a manner that she could physically handle, highly reminiscent of swashbuckling or fencing. His lessons stick have stuck with Arya throughout the show and not just about swordplay. Watch the scene here. The man behind the house of Lannister, Tywin holds the legacy of his family paramount. Some say, including his own daughter Cersei, that the Lannister Legacy is more important to him than his actual children.  One could certainly think so in this scene.

His disdain for his son Jaime’s foolish sense of honor and his impatience that Jaime doesn’t have a keen political perspective comes through in every word. His concern for Tyrion being Catelyn Stark’s prisoner only goes so far as that it’s a detriment to the respect the name Lannister commands.

Tywin may be dangerously genre savvy but his obsessive control of his family’s legacy makes him treat his own children more like minions and assets rather than family. We see that on full display here with him urging his first son as the War of the Five King’s approaches.

And that stag. Holy Moly. Tywin is so manly he prepares all his own game. Not to mention it’s probably the single most explicit moment of foreshadowing in the entire series. Watch the scene here.

A man does not do well for himself in a cage. A man would do well to catch the interest of a fugitive young Stark girl. A man could intrigue this unconventional girl, introduce her to the ways of the Many Faced God.

Unlike any other character we’ve met in the show, Jaqen H’ghar has become quite memetic for his manner of speech and his singular stealth. Three names, three deaths for three lives spared. It’s a dangerous game Arya and Jaqen play, as Tywin Lannister himself holds court and marshals his forces right above them. But Arya’s arc was changed forever by this exchange.

Ygritte, the Wildling kissed by fire Jon Snow goes ranging beyond the wall for the first time with the legendary Qhorin Half-hand. He expected to ambush wildling bands and suffer cold nights but he didn’t expect to have to kill a girl. And a fiery red-head at that.

Ygritte shows early on how much she loves toying with the crows, even faced with imminent execution. I don’t think it was coincidence either that the vehement “bastard!” is what finally got Jon to swing his sword.

Her survival instincts are just as sharp. When Jon strikes his sword away from her, she trips him immediately and makes a break for it. Except when Jon Snow catches up with her again, she’s a bit more in the know about the terrain and thus has the power.

It was a tense start to a rocky romance. But Ygritte won my heart over immediately. Check out the scene here.

Mance Rayder, the King Beyond the Wall Another revelatory introduction for Jon Snow. He thinks the rumbling paragon of ginger manliness Tormund Giantsbane is the King Beyond the Wall. But in fact the man responsible for uniting the free folk is bit less concerned with appearances and stations.

Mance Rayder also isn’t prepared to take Jon’s word at face value, saying, with quite a lot of insight, that he thinks Jon Snow wants to be a hero.

In a rather impressive, marginally true confession, Jon admits that he’s had some disillusion with the Night’s Watch being just and honorable.

Mance still has his suspicions but he’s convinced enough to give Jon a chance. For uniting and leading a campaign of wildlings south, he’s arguably one of the most effective leaders in the whole series. Watch Jon Snow and Mance Rayder’s epic meet.

It was bound to be a morbid affair when Daenerys Targaryen sailed into Astapor looking to buy herself an army of the world-renowned Unsullied. But she wasn’t prepared for just how dehumanizing and brutal their conditions and training actually are. Not to mention the callous and crude Master Kraznys. But she does find one unexpected talent.

The slave translator named Missandei completely manages the interaction between Daenerys and Kraznys. If you watch the scene and the subtitles closely you’ll see her sanitize Kraznys’s rudeness and Daenerys’s authority both to keep both parties engaged.

What a payoff it is to see that Daenerys was playing the fool the whole time, too realize the composure she kept while Kraznys insulted her and to see her annihilate Astapor with her dragons and new army.

It sure was a great pay off for Missandei. Check out the scene here.

Olenna Tyrell, with some wits about her Olenna Tyrell, the Queen of Thorns, is such a refreshingly brazen character.  As soon as Margaery introduces Sansa to her, she’s off with the tactless japes and no-nonsense calls. Next to Tyrion she’s had some of the funniest lines in the whole series.

Her sharp tongue is matched only by her keen political mind. Soon enough she coaxes Sansa into discussing the real reason she’s summoned her. She wants to know the truth about Joffrey. It’s an interesting moment for Sansa, who’s taken every opportunity to lie and praise Joffrey. Yet the apparently earnest combination of Margaery and Olenna convince her to let her guard down for just long enough to confess the abject humiliation and horror Joffrey has put her through.

You think Olenna decided then and there to have Joffrey poisoned? I wouldn’t put it past her. Watch Olenna Tyrell’s intro.

Oberyn Martell, the most interesting man in Westeros And so we come full circle. Tyrion skipped a royal entrance to be found at a brothel and so did Oberyn Martell. Although his tastes are a little more, progressive. Not too many lords, ahem excuse me, princes, would be found sharing whores in a brother with their bastard paramours. Or putting the moves on the handsome procurer, as well.

All seems to be copacetic and then the Rains of Castamere echo through the doors from two Lannister soldiers taking their leisure.

Forgive me for staring, and for confidently waving my hand in a candle flame, keeping face as you insult my paramour and playing a little batman gambit on you to make you draw your sword. Oh my! How ever did my dagger find itself blade-down in your wrist?

Prince Oberyn is too hot to handle, even Tyrion is cowed by his confidence and his barely concealed vendetta against the Lannisters. Watch the scene here.

Were there characters in the series that you felt had more memorable or more entertaining introductions? What characters are you looking forward to meeting in the new season of Game of Thrones? Let us know in the comments! Season 5 premieres Sunday April 12th.