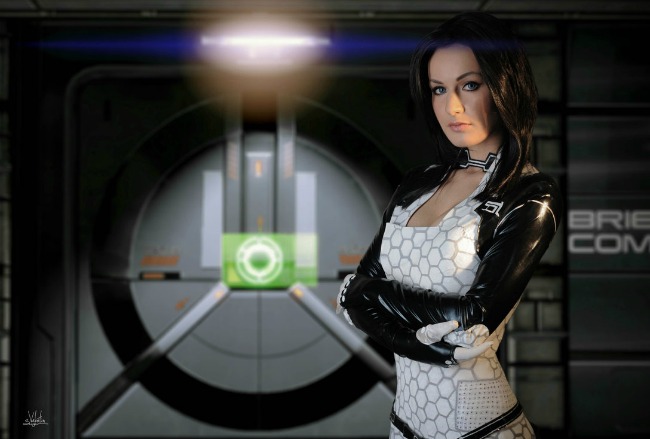 Mass Effect fans far and wide know Miranda – one of male Shep’s love interest options from the hugely popular gaming series. A human CERBERUS officer, Miranda is well traveled, well connected, and well respected. A genetically engineered secret agent/super scientist smashup with a vendetta to settle against her father and a sister she will do anything to protect: do you want to mess with Miranda? I don’t. Ever. For any reason. Coming from an ego-maniac of a father who used his own genome to create Miranda in his image as genetic perfection, from intelligence and physical constitution down to a rear end more famous on the internet than a certain Kardashians’ – Miranda is a consummate deadly beauty and not to be trifled with under any circumstance. Her never ending journey for personal perfection courses into all aspects of her life and is noted by her peers. She has climbed the ranks to be one of the few in the entire CERBERUS organization and galaxy to answer directly to the Illusive Man. Hannuki brings all that to the table – and more -with her stunning Miranda cosplay. Her fabulously tailored uniform is structural perfection, and her choice of the non-standard wardrobe brings something new and refreshing to the front lines. Her fabric choices are masterful – the textures and weathering paired with the low gloss paints a portrait of Mass Effectiveness! Her costume isn’t the only thing that looks like it stepped out of the screen from deep space – as her expression, stature, and presence absolutely embody everything Miranda. Well done, Hannuki – one of my all time favorite Mass Effect cosplays ever, as well as one of my favorite strong women in gaming; I look forward to keeping an eye out for more of your work!