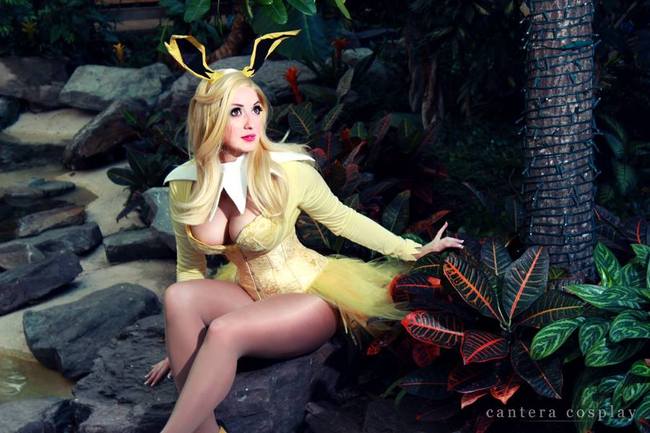 Gaming Cosplay Thursday: An Elecrtifying Cosplay of Jolteon from Pokémon

Pokémon is an anime and manga about trainers catching wild creatures and insects known as Pokémon. There are also several Pokémon movies, video games, and a trading card game. Trainers try to complete the Pokédex, a Pokémon encyclopedia, by catching all the Pokémon. They then train their Pokémon to become powerful enough to compete against other trainers’ Pokémon. As the Pokémon get stronger, they evolve into stronger Pokémon. In the video games and trading card game, players play as a trainer and try to catch and battle Pokémon. One of the Pokémon is called Jolteon, which is evolved from Eevee. Jolteon is a lightning Pokémon that can generate extremely powerful lightning bolts. It’s covered with spiky, white and yellow fur that sparks with electricity. It can be soft to touch but its fur can turn into sharp needles when it’s angry. This cosplay of Jolteon is very creative and unique. Jaycee Cosplay and her costume both look incredible. Her tutu, sleeves, and collar imitate Jolteon’s spiky fur and her ears are adorable. We are definitely impressed!