Sorceress Yennefer from The Witcher in a Superb Cosplay 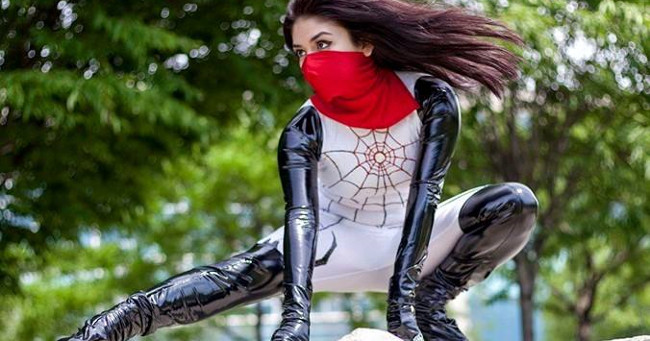 When Peter Parker was bit by that radiated spider, another was bitten at the same time. Cindy Moon’s powers soon manifested, but they were far beyond her control. Taken in by Ezekiel who helped her to control her powers. Locking her in a bunker for her protection however, she lived life underground for seven years. Broken out from the bunker by Spider-Man, she spins herself a new outfit and dubs herself Silk. Faster and with better spider-senses than Spider-Man, her silk is able to withstand electric currant as well as cushion large items, such as a crashing helicopter.

Miss Gidget wove a magnificent Silk cosplay, not only creating her black and white outfit, but also her white attire when she first leaves the bunker. An all white body suit has webbing patterns on the front and upper arms, along with spider silk embellishments. A white mask, a knee wrap and foot wraps complete the outfit. The black and white outfit is Silk perfection, as if she walked off the comic pages. A white bodysuit is adorned with black spider web pattern. Red mask, black knee high boots and black gloves complete the attire. Miss Gidget really brings Silk to life with her awesome cosplays. Photography by View Beyond Sight and CosplayRewind