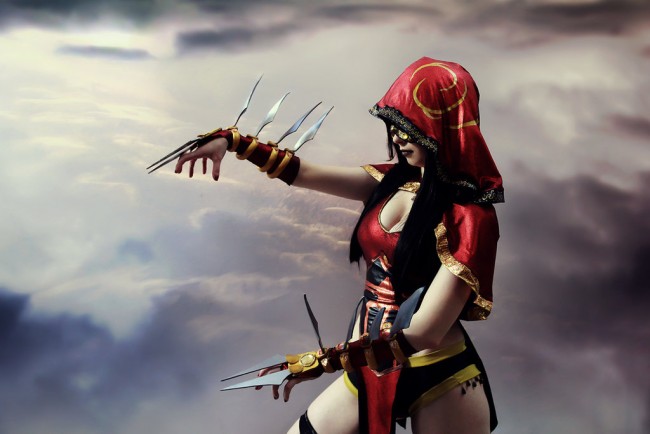 Get Slayed by this Cosplay of Sadira from Killer Instinct

Launched in 1994 as an arcade fighting game, Killer Instinct was rebooted in 2013 by Double Helix games and published by Microsoft for the Xbox One. It’s a one-on-one fighting game that borrows the attack set from Street Fighter, and is also inspired by the finishing moves from Mortal Kombat.

One of Killer Instincts most lethal fighters is the sexy, evil Sadira. She’s a cold-blooded assassin who was born in a refugee camp on the Thai border. As a child, she learned how to fight in order to survive. Her instructor hoped the teachings would build character, but instead what Sadira loved most was the sheer violence and the thrill of dominating and humiliating others. As a teenager, Sadira was recruited into the female insurgent group known as the Red Eyes of Rylai. Her ferocity allowed her to quickly rise up the ranks. The elderly female master of the Red Eyes wore a necklace in the shape of a golden spider, which Sadira passionately coveted. While she pretended to love and respect her leader, she was secretly plotting to seize control and take what she believed to be her rightful place as the leader of the Red Eyes. She eventually got her chance, taking her master unawares and brutally murdering her. When she put the spider necklace on, it came to life in an unnatural way, borrowing into her skin and wrapping around her heart, grotesquely consuming and replacing it. Losing her heart was worth the price, for the power of the spider was immense.

Under Sadira’s leadership the Red Eyes expanded their activities and influence, becoming mercenaries and hired assassins to the rich and powerful all over the world. She caught the attention of ARIA, who contracted her for a huge sum of money. Further work for ARIA made Sadira incredibly rich, allowing her to bring her terrorist organization out of the shadows. Sadira is truly one of the bad gals. The fact that she’s sexy and beautiful doesn’t change the fact that she’s a force of evil. She makes for a compelling villain, and an awesome character to cosplay. Taorich nails her look with a fantastic realization of Sadira. She definitely got the smoldering, exotic going for her, and the costume work is on point. The yellow contacts she employs give her a haunting, not-quite-human look that is perfect for Sadira. The bladed gauntlets and talons are masterfully done. Love the attention to detail, like the beading on the costume, that gives Sadira’s look its Persian vibe.

Photography by Katy-Angel and HaJI

The Bunny Bulma Cosplay of Your Dreams