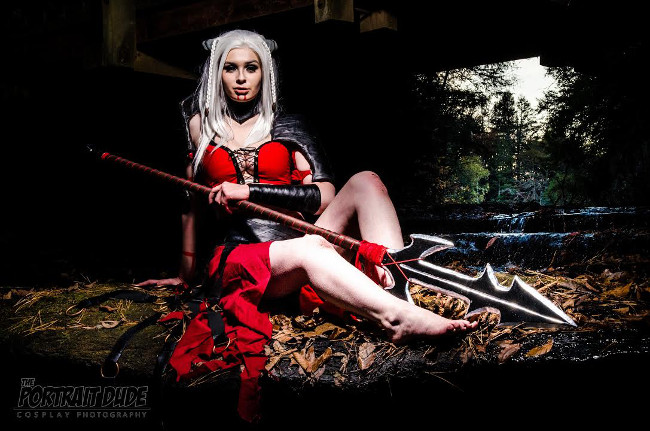 The Qunari race has appeared in all of the Dragon Age video game installments, but only in the recently released Dragon Age: Inquisition, has there been the option to play as a female Qunari. The Qunari, (literally – People of the Qun), is the commonly used name for the white-haired, bronzed skin, physically robust race. In the hugely complex world of Dragon Age, the Qunari homeland is located beyond the turbulent northern oceans of Thedas (the continent on which the games take place). However, contact with the homeland has been intermittent at best for many years.

Qunari are taller and stronger than humans. Most have horns, though some do not. Unlike other races in Thedas, Qunari do not adorn themselves with tattoos. Instead, they use a special warpaint, called Vitaar, which is toxic to all other races. In DA: Inquisition, if one plays as a Qunari Inquisitor, the player uses Vitaar instead of a helmet. The Qunari are a complicated race, and their society and culture varies greatly from those of other races in Dragon Age. For example, their concept of family revolves around peer groups, not parents or blood relations. Children are raised and educated by the administrative Tammassrans, who also keep track of breeding and assign young Qunari to various disciplines. Duty is paramount to their culture, and their society is seen as a living entity. Personal names are strings of genealogical information. Instead of names as we commonly know and understand them, Qunari use titles. They reject private property, don’t buy or sell, and don’t barter. Instead, “Merchants” work to make sure that goods are distributed equally. In Thedas, the Qunari are considered extreme because of their practice of the Qun, which is just as much a philosophy as a religion, if not more. That said, other races can convert and embrace the Qun. Those that do are known as Viddathari. There is so much lore in Dragon Age, and so much that can be said about the Qunari. Their personalities and motivations vary based on whether or not they follow the Qun. For the purposes of cosplay, they are strikingly beautiful to portray. Factor in that All That’s Cosplay’s own Hailey S is also strikingly beautiful, and you’ve got one hell of a cosplay. Hailey S is a huge fan of Dragon Age, and she put her Qunari together in anticipation of the release of DA: Inquisition. The white hair, the horns, the staff, the Vitaar…there is so much here to love. The passion that Hailey S has for Dragon Age really comes through. Just look at that steely Qunari gaze! Gorgeous. This is a powerful look and expertly done cosplay, epically photographed by The Portrait Dude. The costuming is strong and sexy, but much in keeping with the Qunari culture. Whether this is Hailey S’s version of the Inquisitor or a Qunari completely of her own making, there’s certainly a story to be had behind this cosplay. If we could, we’d take Hailey’s Qunari as a companion in our game of Dragon Age. And, if we could, we’d give a go at romancing her. That’s how epic this cosplay is. Hailey S is a fantastic cosplayer and highly skilled craftswoman. See more of her work on her facebook page, right here on All That’s Cosplay, and on our YouTube channel as well.

Movie Cosplay: Nothing Says Sexy like Catwoman with her Vinyl and Whip