Get Plugged in with this Rei Ayanami Cosplay

The Princess Lives: An Anastasia Cosplay! 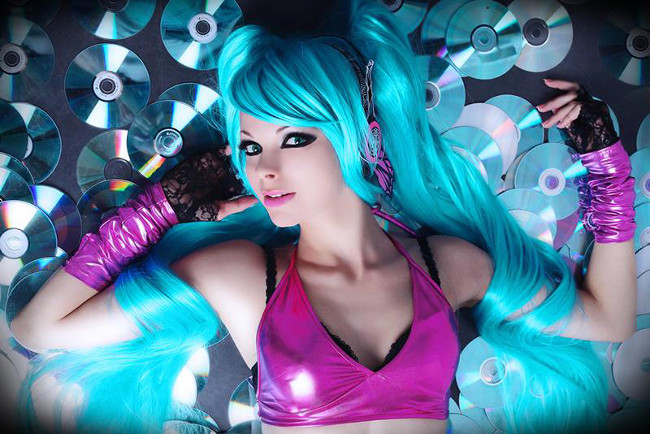 The voice synthesizing software Vocaloid skyrocketed in popularity among the general public due to its release of Vocaloid2. This was due in large part to its inclusion of Hatsune Miku, the blue haired singer. She is the first Japanese singer featured in the program as well as the first member in the Character Vocal Series. Not only has her popularity made Vocaloid mainstream, it has also launched Hatsune Miku to new heights. Another first for this cutie is that she is the first Vocaloid to become a pop idol. She recently made an appearance on the Late Show with David Letterman in order to promote an art exhibit in New York dedicated to her, cementing her pop idol status. Cosplayer Kelly Hill Tone has her own take on the virtual songbird. She still has her iconic long blue ponytails and bangs, she rocks out with her black and fuchsia headphones. Donning a fuchsia two piece ensemble with black accents, she adds a flirtatious touch to her cosplay. Matching gloves with black lacing add that extra touch to bring the costume to another level. The photos really highlight the musical nature of Hatsune Miku. Most of the posing is done amidst a collection of CDs, slightly ironic since Hatsune Miku does not employ the almost outdated technology. It does bring a feeling of glitz to the photos with their shimmer. Kelly Hill Tone has done a fantastic job bringing this pop idol to life.