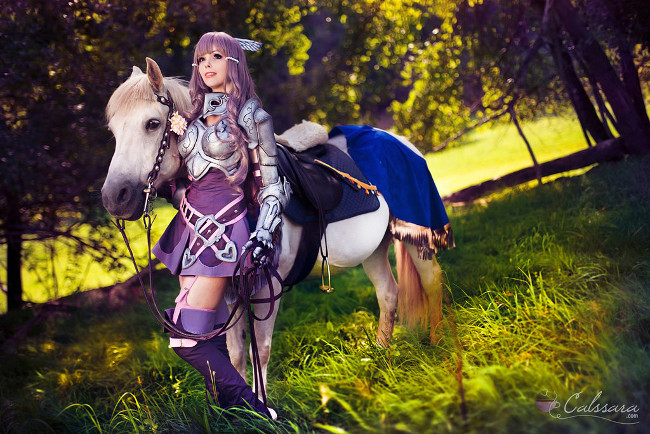 Pulling together a makeshift army of volunteers to fight against dawning threats of war and otherworldly disaster may leave you with a few unorthodox soldiers, to say the very least. Fire Emblem: Awakening follows this premise to bring you an interesting and diverse cast of characters all fighting towards the common goal of protecting the kingdom of Ylisse as part of the Prince’s own personal militia. Some of your comrades in the game are found in the midst of growing tension, while some have been by the kingdom’s side from the very beginning. Out of the many soldiers you can have among your arsenal, Sumia is one of the most kindhearted and gentle of the bunch. Her soft demeanor makes it possible to easily bond with animals, specifically the Pegasi on which she typically rides in battle. While her clumsy tendencies may be a bit unsuited for combat, her driven spirit and determination will always overshadow any blunders left in her wake. Calssara captures Sumia’s sweet personality perfectly with an excellently crafted costume, complete with ornate armor and the perfect partner by her side. The little details in this costume from the feathers carved into the wings of the hair accessory to the flowers placed upon the horse’s reins make this cosplay look as though it’s jumped straight from the battlefield and into real life.

Written by Guest Contributor: Demoiselle
[signoff2]
Hey cosplayers! Want a feature of your own? Click here for information on how to submit your cosplay images!