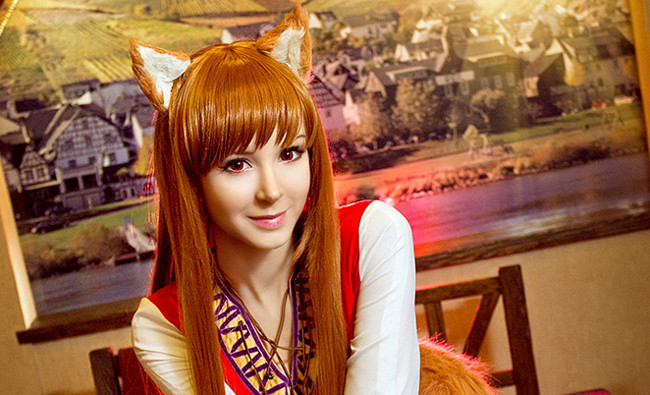 Horo the Wise Wolf Makes an Appearance in Gorgeous Cosplay Horo is a deity in the series Spice & Wolf. A smart wolf deity, she was originally bound to Pasloe to ensure there would always be a bountiful harvest, she ended up hitching a ride with a traveling merchant named Lawrence when she felt no longer needed by the people of the town. Missing her snow filled homeland , she makes a contract with Lawrence to travel with her there. An alcoholic and glutton, she has a strong attachment to Lawrence though her habits have caused him to be in debt. Chrome-sensei becomes the wolf girl in a fun, apple filled cosplay. With golden brown hair, matching wolf ears and white tipped tail, she has all the signature details of Horo when in human form. Wearing a black mid-piece over a red, white and green dress, she hungrily devours copious amounts of apples. Accompanied by an alcoholic beverage, her red eyes shimmer with joy. Photographer Ashitaro does a magnificent job of highlight the work put into the costume, as well as enhancing it with the setting and her focus on Horo’s mischievous nature and gluttony.