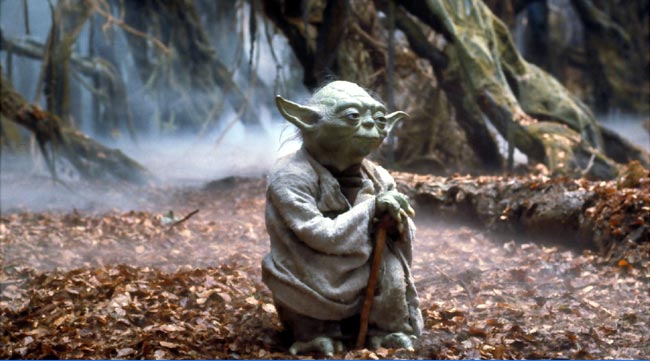 Do you find yourself feeling down about the state of the world? Have you convinced yourself that you don’t matter, or that you can’t make a difference? Are you worried that you can’t become the person you want to be? Well, ditch those Chicken Soup books and self-help literature, because I’ve got a much more effective and potent cure for your anxiety.

For a long time, the Jedi have been a source of positivity, wisdom, and inspiration in this galaxy and others that are far, far away. So move over Dr. Phil, we’re about to get real sensitive and talk about some truly inspirational quotes from Star Wars.

“Only a Sith deals in absolutes.” Obi-Wan Kenobi (Episode III)

This is great advice for just about everyone. Just as Anakin tells his former master that he is either his friend or his enemy, Obi-Wan reminds him that nothing in this world is entirely black or white. To view the world without allowance for shades of grey (but certainly less than fifty of them) is foolish, and limits one’s own potential and understanding. Take some time to see the point of view of other people, without being judgmental. You’ll be surprised what you can learn. Of course, Anakin fails to see the wisdom in Kenobi’s words, and discovers how powerful his master truly is, all at the expense of many a limb.

So, am I saying that a closed mind inevitably leads to detached extremities? Yes. Yes, that’s exactly what I’m saying.

Why do you think Qui-Gon is perceived as one of the coolest Jedi? Because he knows it, and owns it. Qui-Gon is all about two things, both of which he discusses at length with Obi-Wan and Anakin. One of these things is the perception of reality, and Qui-Gon really has a point here. What we focus on will most certainly determine what we see. Ever wonder why happy people seem to get along with everyone? It’s called a paradigm, ladies and gents, and it’s all in the way they view the world. They follow Qui-Gon’s advice! They see those around them as positive and friendly, and as a result, not only do they attract that same positivity, their attitude also spreads to others like the remains of Alderaan spread throughout the galaxy.

The opposite is, of course, true. Walking around with a negative attitude is a sure-fire way to attract pessimism. Speaking of which…

Yoda continues to hammer this point home: Paradigms matter, people. Yoda drops some of the truest words ever spoken on young Anakin Skywalker when he delivers this little nugget. #MicDrop. Not only is it a prophecy and a vision of what is to come if Skywalker learns the ways of The Force, it is also the wisdom of a Jedi Master who has lived for centuries.

Old people love to do two things: Tell stories (in excessive detail) and impart wisdom. Maybe we should start listening, because having lived lives full of happiness, sorrow, with triumphs and regrets, they probably know what they’re talking about, as does Yoda. Fear and anger not only harm those around us, but in the end, they make us suffer as well. And while it’s true that misery loves company, you know what’s better than being depressed with those around you? Not being depressed with those around you and not being around those depressed Now, that’s wisdom. #SecondMicDrop.

How many times have you seen something that can only be described as “too good to be true”? Chances are, you learned that’s exactly the case. Just like when Admiral Ackbar found out that Death Star 2.0 was operational after commencing the attack. Just too good to be true. The world can be a scary place, and people will always try to take advantage of others with offers that are traps, and are too good to be true. Relationships, business deals, and long stretches of seemingly empty road can all be traps. So, be wary, and be careful who and what you put your faith in.

When I was young, I remember watching some show with my dad where a guy had been double-crossed by someone close to him. I told my dad, “I guess you can’t really trust anyone.” Now, I’m not saying that my dad is a Jedi. But maybe. He’s a mysterious guy. But what he told me has stayed with me for years. He said “trust everyone, but verify everything.” I’ve lived my life by those words and have never regretted it. There may not always be a trap, but it’s best to check every single time.

“Remember, concentrate on the moment. Feel, don’t think. Use your instincts.” – Qui-Gon Jinn (Episode I)

Here’s Qui-Gon’s other favorite point to make. More than once, he tells Anakin and Obi-Wan to make sure that they live in the moment, and not to let feelings of apprehension regarding the future or remorse for the past take away from the present. Nothing spoils a great moment more than the realization that it will end. So soak it up and enjoy it! Put the phone down at the concert and just listen to the music.Tuck your social media away and actually be social in the real world for a change. Live in the moment.

But all this is kind of funny, really. Seems to me like Qui-Gon could have afforded to look just a little bit more into the future when fighting Darth Maul…

“If you strike me down, I shall become more powerful than you could possibly imagine.” – Obi-Wan Kenobi (Episode IV)

Rise from the ashes! Learn from your mistakes! Find joy in failure, and all that good stuff! Yeah, losing sucks, embarrassment hurts, and failure is painful. But put on your big boy or girl Jedi robes and get on with it. I have never learned more in my entire life than the times that I screwed up. And Obi-Wan is the same! He was a pretty powerful Jedi in life. But in death, he became something else entirely. He was able to commune with the living and the dead, and to be with Luke in voice and spirit even after his physical body was gone. Did he dread death and failure? No way, because he knew what was coming, and accepted it gracefully. Still, he could have put up a better fight against Vader.

The innocence and raw emotion of Chewie’s dialogue transcends spoken language and ignores all linguistic barriers. What this means is that Chewie is saying exactly what you want him to say, and his words are open to interpretation for each and every one of us. There’s no limit on the advice that Chewbacca can give, and all we need to do is listen with an open mind.

This is definitely one of the most famous Star Wars quotes, and for good reason. It has practical application within the film series, and in daily life as well. Trying does not constitute one’s best effort. And in many situations, a top effort is what is required for success. So next time you have a daunting task ahead of you, approach it with an attitude of assumed accomplishment, knowing that you will succeed. Don’t just try to find a job, go get one. And forget house hunting, and try house buying instead. Don’t limit yourself to what you think you can do. Do what you know is possible.

If these quotes didn’t get you pumped up, then I don’t know what will. Star Wars is full of amazing dialogue and brilliant writing, and these are just a sample of the advice that the Jedi and others can give. What are your favorite Star Wars quotes? Let us know in the comments!